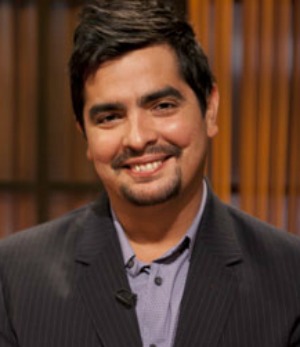 Host of Food Network's "Chef vs. City"; Executive Chef & Owner of NYC restaurants Centrico and Paladar Through his appearances on competitive Food Network shows like “Iron Chef America” and “Chopped,” Aaron Sanchez has established himself not only as one of the foremost television chefs but also as a fierce competitor.

Born in El Paso, Texas, Aaron Sanchez has proven that good cooking runs in his blood. His mother, Zarela Martinez, ran a catering business and has also published a number of cookbooks. When they moved to New York, Zarela Martinez founded Café Marimba, and her son began learning the art of cooking in that restaurant’s kitchens. When he came of age, Aaron Sanchez appearances in kitchens in New Orleans, Providence, San Francisco and back to New York became common. In 2000, he became the head chef at New York’s famous Paladar restaurant. He took on an ownership stake in the restaurant, but finally sold that piece off in 2010. He also owned Centrico restaurant in New York.

For nearly a decade, Aaron Sanchez appearances on television have become de rigueur as he is one of the most popular competitors and chefs on a number of Food Network programs. Among the list of Aaron Sanchez speaker appearances or competitor appearances on television over the past 10 years you will find “Iron Chef America,” “Chopped,” “Melting Pot,” “Boy Meets Grill,” “The Next Iron Chef,” “Throwdown With Bobby Flay” and “Chefs Versus City.” One Aaron Sanchez appearance came as the author of his cookbooks, which is titled “La Comida del Barrio: Latin American Cooking in the U.S.A.” and was released in 2003.

An Evening with Aaron Sanchez