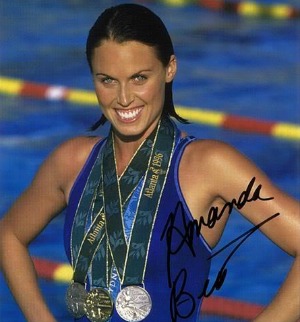 Amanda Beard made her first Olympic swimming appearance in 1996 at the age of 14. Beard won one gold and two silver medals at that first Olympic Games and has been a strong competitor since. She went on to win a gold medal, two silvers and a bronze at the next two Olympic Games. Beard is the winner of eight national titles and is a former world record holder.

Amanda has also made her mark outside of the pool, becoming much more than the 14-year-old Olympic gold medalist that carried her teddy bear around wherever she went. When she isn’t swimming, her energy is focused on being a mom to son Blaise and building her brand. She connects with mothers and fans through her blog, Swim Like a Mom, where she actively shares her passion for raising her son, her journey of motherhood, her favorite recipes and her secret to staying in great shape, in addition to her Olympic experience.

As a huge advocate for living a healthy life and taking care of herself, Beard is also currently a partial owner in Mission Skincare Products, a line designed for people with active lifestyles. The company endorses super stars, such as Dwayne Wade, Serena Williams and many other high-profile athletes.

In April 2012, Beard released her first book, New York Times Best Seller In The Water They Can’t See You Cry, a riveting memoir revealing the truth behind the Olympic spotlight, the battles that she fought along the way and her new found happiness in love and motherhood. Touring coast to coast, Beard stays busing talking about her book, hosting swim clinics, endorsing products, speaking at events and making appearances in top national media like the Today Show, Dr. Phil, Access Hollywood, CNN, USA Today, FOX Sports and more.

Beard recently participated in the 2012 Olympic Trials in July and missed qualifying for what would have been her fifth Olympic Games. Going forward, Beard plans to continue blogging, supporting her skincare product line and current sponsors, growing her family and training for the 2016 Olympic Games.

Revealing the truth behind the Olympic spotlight, Beard's story of overcoming depression, her struggles with drugs and alcohol, self-mutilation and eating disorders is awe-inspiring for women of all ages; a message about being confident in who you are, loving yourself and treating your body right.

In The Water They Can’t See You Cry

In The Water They Can’t See You Cry