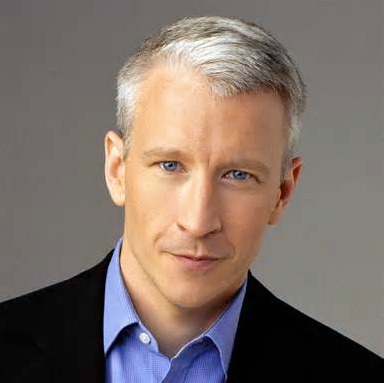 Presenting the world news from a perspective of both a seasoned journalist and a humanist, Cooper delivers events happening daily around the world with urgency, assigning equal significance to the revolutionary and the personal. Cooper provides in-depth coverage of justice, politics, health, and pop culture, and does not shy away from challenging issues and hard-hitting stories. Working his way up the ranks to a reporter and producer for Channel One News, Cooper signed on at ABC as the network’s youngest correspondent. He anchored their live, interactive program,World News Now, and provided reports forWorld News Tonight, 20/20, 20/20 Downtown, and World Saturday/Sunday.

At CNN, he rose to prominence anchoring major breaking news stories, including the network’s overnight coverage of the war in Iraq and news of the military conflict as it was unfolding live.

Cooper’s work is highly regarded and award-winning. Honored for his coverage of such diverse issues of historical influence as the Bosnian Civil War, the famine in Somalia, political Islam and Afghanistan, Cooper has followed his palpable desire to be where the action is. By offering his own strong opinions of the media, his unorthodox route to the news brings the world back to audiences with an energy, approachability, and intimacy unheard of in modern media.

An Evening with Anderson Cooper

"Great Speaker. Wonderful human being. Overall we were very pleased with the turn out for our annual banquet.  Anderson Cooper did a magnificent job!"