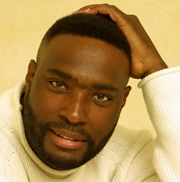 Antwone Quenton Fisher was born in prison to a teenaged mother. He became a ward of the state of Ohio and was placed in foster care immediately. He spent two years in a loving foster home, but when it was apparent that the foster mother had become too attached to Antwone, deeming a reunion with his birth mother too difficult for the child, he was placed in a foster home where he would suffer twelve years of abuse at the hands of the foster family. He survived the cruelties of foster care and the brutalities of homelessness and set on a course of healing after joining the United States Navy where he served his country for eleven years.

Currently, Antwone works in Hollywood as a screenwriter, author and film producer. New York Times Best Seller Finding Fish a Memoir, is the inspiring story of his incredible life's journey. The film, Antwone Fisher, based on Fisher's life and written by Fisher himself reflects on Fisher's life as a sailor in the United States Navy and as a child growing up as a ward of the State of Ohio, living in Cleveland. Through his collection of poetry titled, Who Will Cry For The Little Boy? a National Best Seller and now one of the best selling books of poetry of all time, Fisher reveals the inner truths that took him from a tumultuous childhood to the man he is today.

Getting Started with Life After Aging Out of Foster Care

Recognizing, Accepting and Following the Leader Within

Who Will Cry For The Little Boy?

"Antwone did an  incredible job.  He was informative, engaging, entertaining and stayed focus on the goal of our conference."