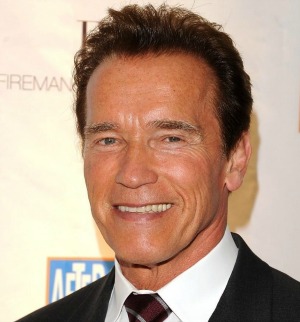 This world-famous athlete and actor was born in Thal, Austria in 1947, and by the age of 20 was dominating the sport of competitive bodybuilding, becoming the youngest person ever to win the Mr. Universe title.

By generating a new international audience for bodybuilding, Schwarzenegger turned himself into a sports icon. With his sights set on Hollywood, he emigrated to America in 1968 and went on to win five Mr. Universe titles and seven Mr. Olympia titles before retiring to dedicate himself to acting. Later, he would go on to earn a college degree from the University of Wisconsin and proudly became a U.S. citizen.

Schwarzenegger, who worked under the pseudonym Arnold Strong in his first feature, Hercules in New York, quickly made a name for himself in Hollywood. In 1977, the Hollywood Foreign Press Association recognized him with a Golden Globe for New Male Star of the Year for his role in Stay Hungry opposite Sally Field. His big break came in 1982 when the sword and sorcery epic, "Conan the Barbarian," hit box office gold.

In 1984, Schwarzenegger blew up the screen and catapulted himself into cinema history as the title character in Jim Cameron's sci-fi thriller, "Terminator."

He is the only actor to be in both categories of the American Film Institute's "Hundred Years of Heroes and Villains" for roles he played in the Terminator series. Other memorable characters include roles in "Commando," "Predator," "Twins," "Total Recall," "True Lies," "Eraser," "Collateral Damage," "Terminator 3: Rise Of The Machines" and a cameo in Sylvester Stallone's homage to action films, "The Expendables" and an expanded role in "The Expendables 2," among others. To date, his films have grossed over $3 billion worldwide.

He gratefully served the people of California as the state's 38th governor from 2003 to 2010. First elected in California's historic recall election, Governor Schwarzenegger ushered in an era of innovative leadership and extraordinary public service.

But it is Schwarzenegger's commitment to giving something back to his state and to his country through public service that gives him the most satisfaction; donating his time, energy, and personal finances to serving others all over the world.

Most notably, Schwarzenegger made California a world leader on renewable energy and combating climate change with the Global Warming Solutions Act of 2006, set a revolutionary political reform agenda, and became the first governor in decades to invest in rebuilding California's critical infrastructure with his Strategic Growth Plan. He also dedicated himself to promoting physical education and after-school programs, and continues to commit his time, energy and personal finances to charitable organizations around the world.

An Evening with Governor Schwarzenegger

"Arnold was a perfect choice for our convention. He was insightful, entertaining and inspiring."