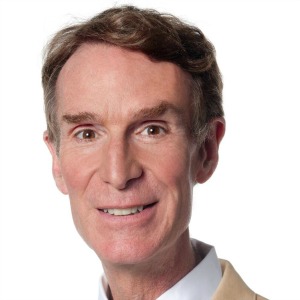 Bill Nye, scientist, engineer, comedian, author, and inventor, is a man with a mission: to help foster a scientifically literate society, to help people everywhere understand and appreciate the science that makes our world work.

Making science entertaining and accessible is something Bill Nye has been doing most of his life. “My family is funny,” he says, “I mean funny in the sense that we make people laugh, not just funny looking.” Nye discovered that he had a talent for tutoring in high school, and while growing up in Washington, DC. He spent afternoons and summers de-mystifying math for his fellow students.

When he wasn’t hitting the books, Nye was hitting the road on his bicycle. He spent hours taking it apart to “see how it worked.” Bill Nye’s fascination with how things work led him to Cornell University and a degree in Mechanical Engineering. After graduation, he headed for Seattle and work as an engineer at Boeing. “There’s a hydraulic resonance suppressor tube on the 747 horizontal stabilizer drive system that I like to think of as my tube,” he says. “I’ve always loved airplanes and flight. The space program was very important to me as a kid. I have a photo from the Apollo 11 mission with the caption, ‘Aldrin’s visor reflects Armstrong…’ Oh yeah, and they’re on the Moon!” exclaims Bill Nye.

It was in Seattle that Nye began to combine his love of science with his flair for comedy, when he won the Steve Martin look-alike contest and developed dual careers as an engineer by day and a stand-up comic by night.

Eventually, he quit his day engineering day job and made the transition to a mid-morning-tolate-at-night job as a comedy writer and performer on Seattle’s home-grown ensemble comedy show “Almost Live.” This is where “Bill Nye the Science Guy®” was born. The show appeared before Saturday Night Live and later on Comedy Central, originating at KING-TV, Seattle’s NBC affiliate.

With fellow KING-TV alumni Jim McKenna and Erren Gottlieb, Bill Nye made a number of award winning shows, including the show he became so well known for, “Bill Nye the Science Guy.” "The Science Guy" show ran on weekends at first and then later on PBS five nights a week and in syndication on weekends. In some markets, you could see "The Science Guy" seven days a week.

While working on "The Science Guy" show, Bill Nye won seven national Emmy Awards for writing, performing, and producing. The show won 28 Emmys in five years. In between creating the shows, he wrote four kids’ books about science. His fifth book, Bill Nye’s Great Big Book of Tiny Germs came out in the spring of 2005.

In 1998, Bill Nye was invited to a meeting at Cornell concerning the nascent missions to Mars. He took one look at the “photometric calibration targets,” and said, “Hey, we’ve got to make these into sundials!” Nye’s dad Ned Nye had been a prisoner of war and had lived without electricity for nearly four years.

He became fascinated with sundials. When he got back to the US, he married his college sweetheart, Jacquie Jenkins. She had been recruited by the Navy to work on secret codes, because she was good at math and science. Ned and Jacquie fostered Bill Nye’s interest in science and Bill caught Ned’s love of gnomonics—sundials. Bill Nye connected the Cornell scientists with Woody Sullivan, a University of Washington professor and astronomer and sundial expert.

Since then, Nye visits Cornell regularly as a Professor in his own right as part of the Frank H.T. Rhodes Visiting Professorship. Bill Nye has also worked extensively to set up and promote the EarthDial Project, a set of sundials around the world visually reminiscent of the MarsDials and linked together on the World Wide Web. People everywhere can use the site and the process of building their own sundials to gain a deep understanding of geography, astronomy, and our society’s complex system oftimekeeping.

Bill Nye has two patents on educational products – a magnifier made of water and an abacus that does arithmetic like a computer. An occasional athlete, Nye has a patent pending on a device to help people learn to throw a baseball better. His next patent is an improved toe shoe for ballerinas.

America’s favorite stand-up scientist hasn’t changed much from that kid growing up in Washington, DC. He still rides his bike to work. He tutored inner-city kids in the I Have a Dream program. And, he’ll still pull out his Periodic Table of the Elements or his Map of Human Skin Tone from his wallet.

Bill Nye is a graduate of Cornell with a Bachelors of Science degree in Mechanical Engineering. He holds two Honorary Doctorate degrees from Rensselaer Polytechnic Institute and Goucher College.

Everything All at Once: How to Think Like a Science Guy, Solve Any Problem, and Make a Better World

"Fascinating, totally awesome. We need engaging speakers that can bring students, Bill Nye did just that. "