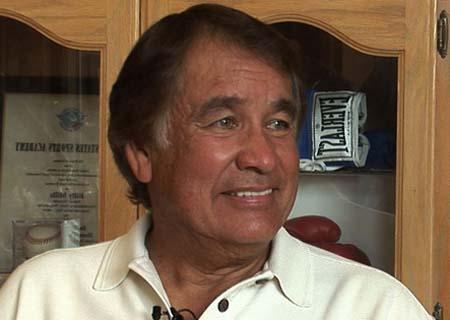 Billy Mills overcame these odds and won the Gold Medal in the 10,000 Meter Run. His victory is considered one of the greatest upsets in Olympic history, and some have stated that his performance at Tokyo was the greatest achievement in modern times. Billy set an American and Olympic record of 28:24.4, a mark all the more extraordinary because he ran 46 seconds faster than his previous personal best.

Since the 1964 Olympics, Billy Mills has shared how he pursued excellence in the world of sports with corporations, associations, universities, and schools. He has inspired thousands of individuals globally to reach within the depths of their capabilities and perform to the greatest of their potential to the betterment of human kind.

Today Billy is the National Spokesperson for Running Strong for American Indian Youth®. An Oglala Lakota (Sioux) who was raised on the Pine Ridge Indian Reservation in South Dakota, Billy earned a track scholarship to the University of Kansas and later served as an Officer in the United States Marine Corps.

In 1983, Billy′s quest for personal excellence was released on the big screen. Running Brave, starring Robby Benson as Billy, follows Billy from childhood through college, ending with his 1964 victory at Tokyo.

Billy is also the author of Wokini, A Lakota Journey to Happiness and Self -Understanding. This book, first published in 1991, is in its ninth printing world-wide. The co-author is Nicholas Sparks, best-selling author of The Notebook, Message in a Bottle, and A Walk to Remember. In Wokini, Billy writes that he learned positive attributes from his father, who encouraged him to find and explore positive desires, to be self- motivated and to be prepared to work to achieve personal goals.

Billy holds five honorary Doctorate degrees and has appeared on NBC Nightly News, HBO Real Sports and been featured on the PBS series Indian Pride as well as in the Sports Illustrated Online 2008 Olympic Coverage.

The Pursuit of Excellence

The High of Self Competition

Wokini, A Lakota Journey to Happiness and Self -Understanding

"Billy Mills was perfect.  We had a fantastic kick off to our convention because of Mills carefully crafted lecture."