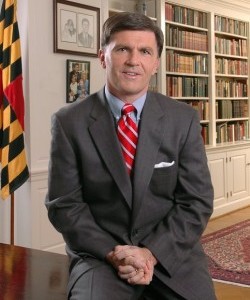 As the 60th governor of the state of Maryland and a United States Congressman, Bob Ehrlich established a reputation as a champion of education, a promoter of economic growth and a friend to the environment. In February, 2007, Governor Ehrlich joined Womble Carlyle Sandridge & Rice, PLLC, as a founder of the firm’s Baltimore office.

The Baltimore native took office in 2003 on a platform of increasing education funding, balancing the state budget and protecting the Chesapeake Bay. He became Maryland’s first Republican governor in nearly 40 years.

During his tenure, Maryland moved from a $1.8 billion budget deficit to a budget surplus, and Governor Ehrlich negotiated balanced budgets each of his four years in office. Schools were funded at the highest allocations in state history, with schools in low-income and high cost-of-living areas receiving special attention. The state’s community colleges and Historically Black Colleges and Universities also received record funding during the Ehrlich administration. He also championed the 2005 Chesapeake Bay Restoration Act, which has reduced pollution in Maryland’s most famous natural resource.

But Governor Ehrlich had a long track record of public service before being elected to the state’s highest office. From 1995-2003, he represented Maryland’s 2nd District in the U.S. House of Representatives, including six years as the House Deputy Whip. He served on the Budget, Energy and Commerce, Government Reform and Oversight, and Banking and Financial Services Committees during his House tenure. He also served as Co-Chairman of the Congressional Biotechnology Caucus.

From 1987-1995, Governor Ehrlich represented the 10th District (BaltimoreCounty) in the Maryland House of Delegates. He also was a member of the Governor’s Council on Child Abuse and Neglect, as well as the Maryland Juvenile Justice Advisory Council during that time.

Governor Ehrlich began his legal career after finishing law school in 1982. He was a successful civil litigator for more than a decade, practicing at the Baltimore law firm of Ober, Kaler, Grimes and Shriver.