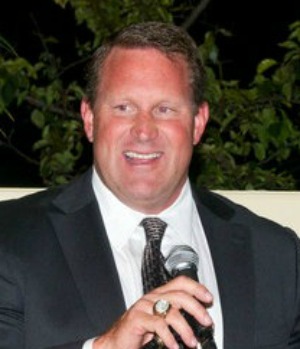 The three-time Super Bowl champion is best known for playing tight end for the San Francisco 49ers. In his twelve year career, he has been a four-time All-Pro NFL performer and received the prestigious Bart Starr Award in 1998. Jones was also inducted into the College Football Hall of Fame for both Division I and II.

His brilliant career came to an abrupt end in January 1998 when he tore his calf muscle during a game.

“It took a lot of hard work and dedication to become a successful NFL pro, but…I discovered there was more to life than sports,” Jones said, according to hitrunscore.com. “You see, I had a significant void on the inside that athletics and friends could not fill. Later I realized that the key to fulfillment and contentment in life was a personal relationship with Jesus Christ.”

"Playing in the NFL has been a very rewarding experience for me. If you had told me early in my life that I would help my team win Super Bowls, play in Pro Bowls and earn various All-Pro honors, I wouldn't have believed you.

"The fact is, I never thought about becoming an NFL tight end. As a young person growing up in San Jose, I had aspirations of playing pro baseball. In high school, I made first-team all-league on the diamond and was a second string football player. After I graduated, I went to Santa Clara University on a baseball/football scholarship, and it was there that my football skills blossomed. I was first-team all-conference for three years, earned conference Player of the Year honors as a senior and also became an AP, Football News and Kodak All-American.Then in 1986 I was drafted in the fifth round by the Pittsburgh Steelers. After my first season which included a car accident and neck injury, I wound up back near my hometown playing for the San Francisco 49ers. And as the old saying goes, "The rest is history.""It took a lot of hard work and dedication to become a successful NFL pro, but it may surprise you that football has never been my top priority in life."Back in high school, I discovered that there was more to life than sports. You see, I had a significant void on the inside that athletics and friends could not fill. Later I realized that the key to fulfillment and contentment in life was a personal relationship with Jesus Christ.As a sophomore, I asked Jesus to come into my life, and since that time He has given my life meaning and purpose. Before this time I had always believed that God was real, but I never knew Him in a personal way.

"Through the Young Life program, I was challenged in many areas, and I discovered in the Bible that God really loved me and had a plan for my life. A scripture verse that has always meant a lot to me is Proverbs 3:5-6: "Trust in the Lord with all your heart, and do not rely on your own insight. In all your ways acknowledge Him and He will make your paths straight."

"Having Jesus Christ in my life gives me the assurance that I'll spend eternity in heaven, and the Bible says that the only way to Heaven is through Him, "I am the way, the truth and the life; no one comes to the Father except through me." (John 14:6) "And there is salvation in no one else, for there is no other name under heaven given among men by which we must be saved." (Acts 4:12)

"God has allowed me to grow in my relationship with my family and friends. I love them, and I can honestly say that they are more important to me than football.

"The Lord has also given me the strength and courage to deal with career threatening injuries, and it's only by His grace that I have been able to continue to perform. "My grace is sufficient for you, for my power is made perfect in weakness." (2 Corinthians 12:9)

"Until I turned my life over to Jesus Christ, I never had real joy, peace and contentment on the inside. All the things the world has to offer -money, fame, and personal pleasure-- amount to nothing more that temporary happiness and false security.

"Jesus Christ is the answer to life, and I pray that you will begin a personal relationship with Him today."

"Brent Jones went above and beyond to prepare well for our program.  He was inspiring, sincere and passionate for the cause of the unborn."