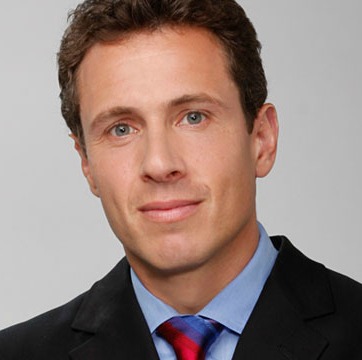 Christopher "Chris" Cuomo is a television journalist at CNN.  He formally has worked at ABC News chief law and justice correspondent, and co-anchor for ABC's 20/20. He is the son of former New York Governor Mario Cuomo and the brother of current Governor Andrew Cuomo.

Cuomo attended The Albany Academy, received his undergraduate degree from Yale University, and his Juris Doctor from Fordham University and is a licensed attorney. He resides in New York City with his wife, Cristina, and three young children: a son, Mario, and daughters Bella and Carolina Regina.

Cuomo was a correspondent for the Fox News Channel and Fox Broadcast Network’s Fox Files, where he covered a wide range of stories focusing on controversial social issues. He also served as a political policy analyst for Fox News Channel. Prior to Fox News, Cuomo made similar appearances on CNBC, MSNBC and CNN.

As co-anchor of 20/20, Cuomo has championed purposeful journalism. His most recent long-form coverage includes a groundbreaking look at the new face of heroin. His year-long coverage reveals suburban heroin addiction attacking families like never before. Other recent work has tackled major issues such as the Haiti earthquake, child custody, bullying, homeless teens; policy change has come after Cuomo’s undercover look at for-profit school recruiters, leading to an industry clean-up; and Cuomo’s tip from a BMW owner led to a recall of over 150,000 affected models.

From September 2006 - December 2009, Cuomo was the news anchor for Good Morning America. Cuomo was the primary reporter on all breaking news stories, both at home and around the world, including dozens of assignments in some 10 countries. He covered the war on terrorism, embedded on multiple occasions in Pakistan, Afghanistan and Iraq (where his convoy was hit by an IED).

At home, he covered all major shootings, such as Virginia Tech, Ft. Hood, and the Pennsylvania Amish school shootings; hurricanes Katrina and Rita; as well as the Sago Mine collapse, and the Minneapolis bridge collapse in August 2007. Often Cuomo would anchor morning and evening coverage, and much of the work was rewarded for being outstanding journalism.

Cuomo maintains a website "Cuomo on the Case" (www.ChrisCuomo.com), where Cuomo can take questions, and which acts as a platform for his reporting and discussion on a number of issues.

Cuomo has two weekly digital programs, The Real Deal and Focus on Faith, which discusses matters of spirituality and appears with Father Edward Beck on ABC News Now, the network’s 24-hour digital outlet.

Awards Cuomo's has received including multiple Emmy Award nomination. Notably, Cuomo’s Good Morning America profile of the 12-year-old poet, Mattie Stepanek, was recognized with a News Emmy, making Cuomo one of the youngest correspondents to receive a News Emmy in network news history.

Cuomo has been awarded Polk and Peabody Awards for team coverage, and his work has been singled out in the areas of breaking news, business news, and legal news, with the Edward R. Murrow Award for breaking news coverage, a Loeb Award for business reporting and the American Bar Association Silver Gavel Award for investigating juvenile justice.

"Chris was powerful.  His message, timely. His style, brilliant. We had record turn out for the event, overall a great success."