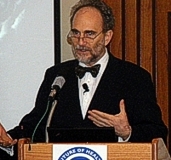 Dr. Feied developed a unique practical software architecture ("Azyxxi") for the rapid integration, organization, display, and mining of all data present in any medical setting—including data from all legacy systems, across many regions—in real time. In 2006 the Azyxxi system was acquired by Microsoft Corporation as the enterprise core of a new Health Solutions Group, and in 2008 the system was renamed "Amalga."

His work has been the subject of a series of five Harvard Business School case studies. In 1994 Dr. Feied was honored by the King of Morocco with a medal of recognition for distinguished contribution to international development in medical research, and in 2001 his systems development work was honored with a Computerworld Smithsonian Award for Innovation. In 1997 he was admitted to the Cosmos Club in the category of Meritorious Original Work. In 2003 he received the Informatics Leadership Achievement Award of the American College of Emergency Physicians. In 2005 his Federal Project ER One received an architectural design award of excellence from Modern Healthcare, and his informatics work was recognized by Microsoft with an award as Microsoft Physician of the Year.

The Future of Healthcare

The Future of Healthcare Technology

"Dr Feied's presentation was timely, to the point and filled with humor and inspiration.  What else can you ask for? We really enjoyed the event."