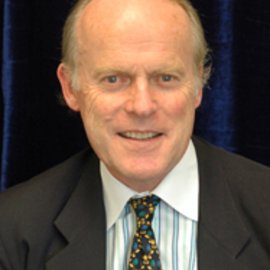 David Aikman is an award-winning print and broadcast journalist, a best-selling author, and a foreign affairs commentator. His wide-ranging professional achievements include a 23-year career at TIME Magazine with reporting spanning the globe of nearly all the major historical events of the time. He appears regularly on TV news shows to provide perspective and insight on breaking news events around the world.During his years as a foreign correspondent, Aikman was based on four continents and reported from 55 countries. He has interviewed some of the biggest newsmakers of the past half-century, including five Israeli prime ministers, two American presidents, Nobel Prize winners Mother Teresa and Elie Wiesel, and Russia's first post-Communist leader, Boris Yeltsin. He covered wars and revolutions from Russia to Southeast Asia, from Central America to the Middle East, and was TIME Magazine bureau chief in Berlin, Beijing and Jerusalem.

Since leaving TIME, Aikman has authored nine books, the newest of which is The Delusion of Disbelief: Why the New Atheism is a Threat to Your Life, Liberty and Pursuit of Happinness(Tyndale, 2008), a strenuously argued intellectual offensive against the New Atheism trumpeted in the atheistic best-sellers by Richard Dawkins, Daniel Dennett, Sam Harris and Christopher Hitchens. Aikman shows how throughout history political freedom has always been protected by religious freedom.

Aikman is also the author of Billy Graham: His Life and Influence (Thomas Nelson, 2006), the first analytical biography of the great evangelist to examine in detail Graham's theological battles, his path-breaking – and controversial – trips to the Communist world, and his worldwide political and historical impact beyond preaching the Gospel.

Aikman's ground-breaking Jesus In Beijing: How Christianity is Transforming China and Changing the World Balance of Power (Regnery, 2003) is the most comprehensive and up-to-date book-length account of the phenomenal growth of Christianity in China today and the historical influences on its development. A revised and updated paperback edition was released in October 2006, and it continues to be regarded as a must-read for anyone interested in the church in China.

Aikman's 1999 book, Great Souls: Six Who Changed The Century, continues to win praise from readers and is one of most popular subjects he is asked to speak on. In Great Souls, Aikman profiles six extraordinary people who changed the 20th century by modeling essential, undeniable virtues: Mother Teresa - Compassion, Nelson Mandela - Forgiveness, Billy Graham - Salvation, Aleksandr Solzhenitsyn - Truth, Pope John Paul II - Human Dignity, and Elie Weisel - Remembrance. Based on personal interviews with some of the six, Aikman examines the spiritual impulses that motivated these "great souls" in their life's work and impacted the world.

In 1999, Aikman founded a global fellowship of Christians in journalism called Gegrapha to support and encourage Christians working in the secular media.

With special expertise in China, Russia, the Middle East, Mongolia and religious freedom issues worldwide, Aikman is frequently asked to deliver expert testimony at Congressional hearings and to provide expert commentary on headline news from around the world. He was Fox News' on-air commentator for breaking stories such as the Russia's military moves into Georgia, the Mumbai terror attacks and Israel's military incursion into Gaza.

Aikman is a popular and accomplished speaker whose English accent and arsenal of eyewitness-to-history stories quickly charm his audiences. His wide-ranging speaking engagements have included multiple appearances at Harvard University, the U.S. Military Academy at West Point, the U.S. Coast Guard Academy, and other colleges and universities across the country; the Council on Foreign Relations, the RAND Corporation and other think tanks; and church groups and religious conferences, especially those focused on China, Israel or the media. He is also a regular moderator for seminars hosted by The Trinity Forum, and has had several return engagements as an "enrichment" lecturer on the Cunard Line of cruise ships.

The Delusion of Disbelief: Why the New Atheism is a Threat to Your Life

Jesus In Beijing: How Christianity is Transforming China

Jesus in Beijing: How Christianity Is Transforming China And Changing the Global Balance of Power

When the Almond Tree Blossoms

The Delusion of Disbelief: Why the New Atheism is a Threat to Your Life, Liberty, and Pursuit of Happiness

A Man of Faith: The Spiritual Journey of George W. Bush