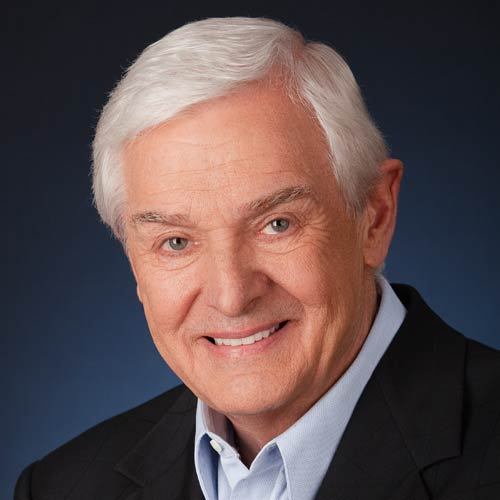 Born February 13, 1941 in Toledo, Ohio, Dr. Jeremiah was raised in a family deeply committed to ministry. At the age of eleven, Dr. Jeremiah and his family moved to Dayton, Ohio where his father, Dr. James T. Jeremiah, was the Pastor of Emmanuel Baptist Church, and in 1953 became the President of Cedarville College in Cedarville, Ohio.

As Dr. Jeremiah was sensitive to God’s leading in his life, he followed in his father’s footsteps. In 1963, Dr. Jeremiah received a Bachelor of Arts from Cedarville College. In that same year, Dr. Jeremiah married his college sweetheart, Donna Thompson who also was attending Cedarville College as a business major. He went on to earn a Masters degree in Theology from Dallas Theological Seminary in 1967. He completed additional graduate work at Grace University and was granted the Doctor of Divinity degree from Cedarville College in 1981. In 1969, Dr. Jeremiah began Blackhawk Baptist Church in Fort Wayne, Indiana, and developed a Christian school grades K through 12. In the 12 years he served as pastor, Blackhawk Baptist Church grew from 7 families to 1300 members. He also launched The Bible Hour television program. As Dr. Jeremiah began his ministry at Shadow Mountain, he felt God’s calling to continue the broadcast ministry he started in Fort Wayne. In 1982, Turning Point Ministries became a reality.

Today, Turning Point's 30-minute radio program is heard nationally and internationally on over 1800 stations and translator/satellators. In recognition of Dr. Jeremiah’s commitment to teaching the Word of God, he received the Broadcaster of the Year Award in 1999 from the National Religious Broadcasters (NRB), in August 2002, received the Award of Merit from the Western Chapter of National Religious Broadcasters for Excellence in Broadcasting and Faithfulness in Service, and in 2006 Turning Point received the Best Radio Teaching Program Award. Dr. Jeremiah has served on the Board of Directors for the NRB since 1996. Turning Point launched a television program in 1982 in San Diego and went nationwide in 2000.

Now seen around the world through cable and satellite technology, as well as on terrestrial stations all across the United States, conservative estimates suggest that close to 200 million homes around the world have access to Dr. Jeremiah's Bible teaching each week. Turning Point Television offers a half-hour Bible study message and a full hour worship service with the same great preaching. Carried on several national and international networks such as TBN, ION, and INSP, Turning Point Television has most recently been added to Middle East TV Network.

A dedicated family man, Dr. Jeremiah believes that without the support and encouragement of his wife, Donna, Turning Point would have never been brought into existence. He and Donna have four grown children and eleven grandchildren.

The Power of Encouragement

The Power of Prayer

The Power of Compassion

The Power of Love

The Power of Encouragement

What the Bible Says About Angels

God In You: Releasing the Power of the Holy Spirit in Your Life

Gifts from God: Encouragement and Hope for Today's Parents

Slaying the Giants in Your Life

My Heart's Desire: Living Every Moment in the Wonder of Worship

The Things That Matter: Living a Life of Purpose Until Christ Returns

The Prayer Matrix: Plugging into the Unseen Reality

Searching for Heaven on Earth

"Dr. Jeremiah is a great speaker. We could not have chosen someone better. We were blessed and enriched by his presentation."