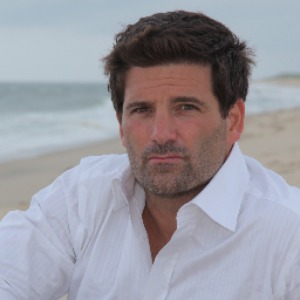 My name is Dennis Michael Lynch and I'm ashamed to say I haven't voted in 20-years. Even worse, I can't remember who I voted for? Trust me, there's no political agenda fueling this film.

Prior to producing and directing this film, I cared less about illegal immigration. And yet for some crazy reason, I risked my life to make a non-partisan documentary about the hottest political topic in America. What's crazier is why so many people don't want you to see it.

I'm stuck at a red light outside a 7-ELEVEN in Southampton, NY. An army of undocumented men stand on the corner in search of work. Across from them is a small, middle-aged man waving an American flag and a home-made sign that reads, "Deport Illegals."

Tom protesting. Tom Wedell is an out-of-work roofer. He has stood alone in the same spot every morning for the past five-years protesting against illegal immigration. That said, every day for years I passed by Tom but never paid much notice. Then one day something different happened. As I sat idle at the light, my radio started playing the Neal Diamond song, "America."

Somehow the lyrics forced me to view the situation differently. I pulled over and ripped out my camera. A half-hour later I'm 30-minutes into a new film called, THEY COME TO AMERICA.

The film focuses on the human and financial costs of illegal immigration. We filmed over the span of 14-months (Oct. 2010 - Nov. 2011) and journeyed through Washington, DC and many states including but not limited to, Arizona, Illinois, Florida, Washington DC, New York and Colorado. The debates, events, people, and places we captured on film is simply amazing. When it comes to the topic of illegal immigration, this is a first-of-its-kind film.

From day one we faced lines of resistance. The first line came from politicians. Members from both sides of the aisle avoided answering tough questions.  When we said their rhetoric was unacceptable, they ran from us, literally. We captured it all on film.

The second line came from civil liberty groups who support illegal immigrants. We worked endlessly to get the ACLU and other groups like them to appear on camera. We told them our questions would be tough, but fair. Everyone turned us down. We finally had an organization, Americans for Immigrant Justice, accept our request for an interview. We traveled 1,300 miles to their office only to be turned away when we arrived. We captured it all on film. (Eventually, we found a DC lobbyist and immigration attorney. I appreciate their guts.)

Then there was the Border Patrol.

We were constantly stopped by BP Agents when they saw us filming in areas where illegal crossings take place. At first, we figured it was a security measure. But the interrogations continued long after it was determined we were not terrorists or members of a drug cartel. I was forced to speak with a BP Supervisor who demanded more details. "The film is about illegal immigration," I said.  "I need more specifics," demanded the Supervisor. We captured the conversation on film.

They Come to America is anything but politically correct. There is no slant to the left or right. I am not a racist, nor do I hate Latinos. In fact, it is just the opposite. I am concerned about the racial tensions in this country... really concerned. And some of the nicest, most polite, hardest working people I know are of Hispanic descent. I add, had there been 200 undocumented Irish guys looking for work outside 7/11, I would have made the same movie.

I am not funded by anyone. I do not take donations nor do I donate to immigration groups of any kind. I am not a rich man who has extra money sitting around.  What I am is a father, and I am a concerned American who wants politicians to stop ignoring this problem and face it head on like I did. As a film maker, I believe we made a well-produced film that exposes the truth, and the truth is that illegal immigration is the biggest problem this country faces in the years to come. It is a crime, and it comes at a tremendous human and financial cost to both Americans and illegal immigrants.

I have been turned down by roughly 30 US film festivals, every Hollywood distributor I contact ignores me, most theater houses won't allow me to rent their screens, a digital distributor made it so my film will not be available on iTunes, Netflix or cable VOD before the elections... the list goes on and on and on and on.  But even still, I won't give up.

Immigration and the Future of America

"Dennis personally tailored presentation was the best that I have ever seen by a professional speaker. In sum, your message was exactly what was needed, and the leadership guidelines you gave us were right on."