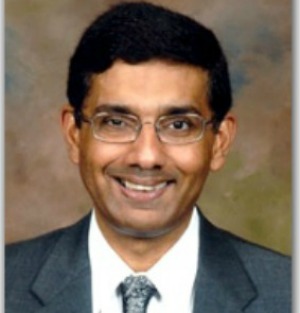 Dinesh D’Souza has had a 25-year career as a writer, scholar, and public intellectual. Born in Mumbai, India, D’Souza came to the U.S. and graduated Phi Beta Kappa from Dartmouth College in 1983. He served as a fellow at the American Enterprise Institute and the Hoover Institution at Stanford University, the president of The King’s College in New York City, and a former policy analyst in the Reagan White House.

Called one of the “top young public-policy makers in the country” by Investor’s Business Daily, D’Souza quickly became known as a major influencer on public policy through his writings. D'Souza's first book, Illiberal Education (1991), publicized the phenomenon of political correctness in America’s colleges and universities and became a New York Times bestseller for 15 weeks.

He went on to publish even more controversial and hotly debated books, including Ronald Reagan: How an Ordinary Man Became an Extraordinary Leader, The Virtue of Prosperity, Letters to a Young Conservative, What’s So Great About Christianity, Life After Death: The Evidence, and Godforsaken. Five of his books became national bestsellers, including The End of Racism, What’s So Great About America, The Enemy at Home, The Roots of Obama’s Rage, and Obama’s America: Unmaking the American Dream. The Roots of Obama’s Rage was described as the most influential political book of the year, and Obama’s America climbed to #1 on the New York Times bestseller list and also inspired a documentary on the same topic.

The film 2016: Obama’s America has risen to the second-highest all-time political documentary, passing Michael Moore’s Sicko and Al Gore’s An Inconvenient Truth. In addition, 2016 has risen to #6 on the bestselling list of all documentaries. These endeavors—not to mention a razor-sharp wit and entertaining style—have allowed D’Souza to participate in highly-publicized debates about Christianity with some of the most famous atheists and skeptics of our time.

D’Souza has been named one of America’s most influential conservative thinkers by the New York Times Magazine. The World Affairs Council lists him as one of the nation’s 500 leading authorities on international issues, and Newsweek cited him as one of the country’s most prominent Asian-Americans. D’Souza’s articles have appeared in virtually every major magazine and newspaper, including the New York Times, Wall Street Journal, The Atlantic Monthly, Vanity Fair, New Republic, and National Review. He has appeared on numerous television programs, including the The Today Show, Nightline, The News Hour on PBS, The O’Reilly Factor, Moneyline, Hannity, NPR’s “All Things Considered”, CNBC’s Kudlow Report, Lou Dobbs Tonight, and Real Time with Bill Maher.

The Virtue of Prosperity

What’s So Great About Christianity

What’s So Great About America

Letters to a Young Conservative

Death of a Nation

The Big Lie: Exposing the Nazi Roots of the American Left

Ronald Reagan: How an Ordinary Man Became an Extraordinary Leader

The Virtue of Prosperity

Letters to a Young Conservative

What’s So Great About Christianity

Life After Death: The Evidence

The End of Racism

What’s So Great About America

The Enemy at Home

The Roots of Obama’s Rage

"Dinesh’s fresh, thought-provoking perspective on current affairs captivated AFP-Michigan citizen activists. He consistently engages and entertains his audiences, and is one of few conservative thinkers to chart new territory with his ideas time and time again.”