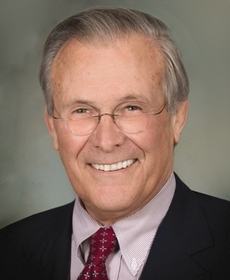 Donald H. Rumsfeld was sworn in as the 21st Secretary of Defense on January 20, 2001. Before assuming his present post, the former Navy pilot had also served as the 13th Secretary of Defense, White House Chief of Staff, U.S. Ambassador to NATO, U.S. Congressman, and chief executive officer of two Fortune 500 companies.

Rumsfeld attended Princeton University on academic and NROTC scholarships (A.B., 1954) and served in the U.S. Navy as an aviator and flight instructor. In 1957, he transferred to the Ready Reserve and continued his Naval service in flying and administrative assignments as a drilling reservist until 1975. He transferred to the Standby Reserve when he became Secretary of Defense in 1975, and to the Retired Reserve with the rank of Captain in 1989. In 1957, he came to Washington, D.C. to serve as Administrative Assistant to a Congressman.

After a stint with an investment banking firm, he was elected to the U.S. House of Representatives from Illinois at the age of 30, and was re-elected three times. Rumsfeld resigned from Congress in 1969, during his fourth term, to join the President's Cabinet. He has served as Director of the Office of Economic Opportunity and Assistant to the President, Counsellor to the President and Director of the Economic Stabilization Program, and U.S. Ambassador to the North Atlantic Treaty Organization (NATO) in Brussels, Belgium.

Secretary Rumsfeld is responsible for directing the actions of the Defense Department in response to the terrorist attacks on September 11, 2001. The war is being waged against a backdrop of major change within the Department of Defense. The department has developed a new defense strategy and replaced the old model for sizing forces with an approach more appropriate to the 21st century. Secretary Rumsfeld proposed (and the President approved) a significant reorganization of the worldwide command structure, known as the Unified Command Plan; the plan resulted in the establishment of the U.S. Northern Command and the U.S. Strategic Command, with the latter in charge of the responsibilities formerly held by the Strategic and Space Commands which were disestablished. The Department also has refocused its space capabilities and fashioned a new concept of strategic deterrence that increases security while reducing strategic nuclear weapons. To help strengthen the deterrent, the missile defense research and testing program has been reorganized and revitalized, free of the restraints of the ABM treaty.

Rumsfeld also currently chairs the Rumsfeld Foundation, which supports leadership and public service at home and the growth of free political and free economic systems abroad. The Rumsfeld Foundation funds microfinance development projects, fellowships for graduate students interested in public service, the development of young leaders from Central Asia and the Caucasus, and charitable causes that benefit the men and women of the U.S. armed forces and their families.