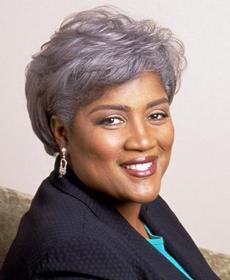 Brazile began her political career at the age of nine when she worked to elect a city council candidate who had promised to build a playground in her neighborhood; the candidate won, the swing set was installed, and a lifelong passion for political progress was ignited. Four decades and innumerable state and local campaigns later, Brazile has worked on every presidential campaign from 1976 through 2000, when she became the first African American to manage a presidential campaign.

Author of the best-selling memoir Cooking with Grease: Stirring the Pots in American Politics, Brazile is an adjunct professor at Georgetown University; a syndicated columnist for Universal Uclick, Ms. Magazine, and O, The Oprah Magazine; and an on-air contributor to CNN and ABC, where she regularly appears on This Week. Her secret passion is acting: she has recently made two cameo appearances on CBS's The Good Wife. Ask her and she'll tell you that acting, after all, is the key to success in politics.

Aside from working for the full recovery of her beloved New Orleans, Brazile's passion is encouraging young people to vote, to work within the system to strengthen it, and to run for public office. Since 2000, she has lectured at over 125 colleges and universities across the country on topics such as inspiring civility in American politics, race relations in the age of Obama, why diversity matters, and women in American politics.

Cooking with Grease: Stirring the Pots in American Politics

Presidential Politics: What Happened to "We the People?"

Cooking with Grease: Stirring the Pots in American Politics

"Donna Brazile was brilliant!  I very good choice indeed for our program.  She educated, inspired and kept us all to edge of our seats."