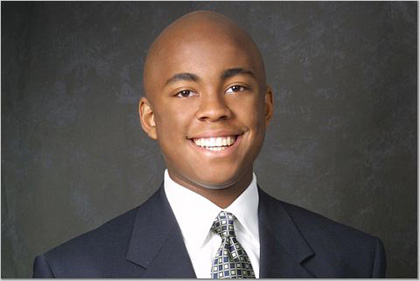 Raised in the impoverished south side of Chicago, Dr. Farrah Gray defied the odds and became a self-made millionaire by the age of fourteen. At the age of twenty-one, he received an Honorary Doctorate degree of Humane Letters from Allen University in recognition of his ingenious economic mind and distinguished commitment to the development of values such as leadership, integrity, and scholarship. In his rise from poverty to international prominence as an entrepreneurial icon and pre-eminent power speaker, Dr. Gray has inspired millions around the world.

Gray was also featured as one of the “Dream Team Financial Experts” for the March 2008 issue of O, The Oprah Magazine. MSN.com placed Farrah Gray on its "Young Tycoons" List along with Facebook’s founder Mark Zuckerberg.

Gray is a syndicated columnist with the National Newspaper Publishers Association (NNPA), a federation of 200 weekly newspapers reaching more than 15 million readers. As an AOL Money Coach, Dr. Gray gives advice to millions of AOL subscribers daily on leadership, personal development, diversity, strategic planning, creativity, business development, and financial management. Dr. Gray is the Co-CEO of Realty Pros Real Estate Asset Management Company Brokerage with over thirty million under management. He is also the Co-Publisher/Editor-in-Chief of Prominent, an online edutainment magazine. Gray is the youngest person to have an office on Wall Street. Between the ages of 12 and 16 years old, Dr. Gray founded and operated business ventures that included KIDZTEL pre-paid phone cards, the One Stop Mail Boxes & More franchise, and Teenscope, a youth AM/FM interactive teen talk show. Gray was also Executive Producer of a comedy show on the Las Vegas Strip and owner of Farr-Out Foods, "Way-Out Food with a Twist," aimed at young people. Farr-Out Foods generated orders exceeding $1.5 million.

Dr. Gray began his entrepreneurial, personal, and civic development as a stellar young citizen at six years old by selling homemade body lotion and his own hand-painted rocks as book-ends door-to-door. At age seven, he was carrying business cards reading "21st Century CEO." At eight, Gray became co-founder of Urban Neighborhood Enterprise Economic Club (UNEEC) on Chicago's South side. UNEEC was the forerunner of New Early Entrepreneur Wonders (NE2W), the flagship organization he opened on Wall Street. NE2W enlisted, educated, and engaged at-risk youth by creating and developing legal ways for them to acquire additional income.

Dr. Gray’s latest books include Get Real, Get Rich and The Truth Shall Make You Rich, a no-holds-barred rejection of the fallacies we've all heard, and believed, about success and how to achieve it. His book appeared on the Amazon and Barnes & Noble's Bestseller lists two weeks before its international release. Reallionaire was also named as the number one bestselling nonfiction paperback book in the August 2005 Issue of Essence Magazine. Reallionaire has been endorsed by former President Bill Clinton, Pierre Sutton, Stedman Graham, Jack Canfield, and Mark Victor Hansen. Gray's book and his journey to succeed against the odds have become required reading and part of classroom study from elementary school to entrepreneurship departments on college and university campuses such as Harvard University and Princeton. Gray’s books have been translated into Russian, Korean, Indonesian, and Vietnamese languages with book sales in Africa, Australia, Europe, and in Central and South America countries. Gray is also a contributing author to Chicken Soup for the African-American Soul. Dr. Gray's honors include Keys to the Cities of Dallas, Shreveport, and Cincinnati. He lives in Las Vegas, Nevada.

“An all-star with priceless advice “

Get Real, Get Rich

The Truth Shall Make You Rich

"Amazing speaker... a true inspiration. Farrah customized his program to meet our needs and exceeded our expectations."
--Meeting Executive - Boeing