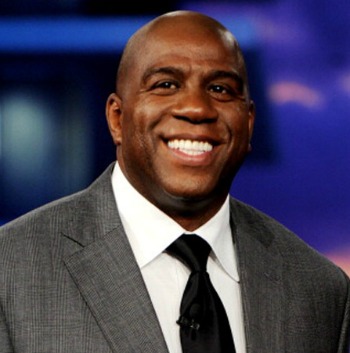 NBA legend, two-time Hall of Famer, entrepreneur, philanthropist, motivational speaker… these are but a few of the honors and distinctions Earvin “Magic” Johnson has racked up over the years. Today, the business mogul has successfully parlayed his skills on the basketball court into multimillion-dollar success in the business world, propelling his company to the status of #1 urban brand in America.

During his 12-year NBA career, Johnson led the Lakers to five NBA championships and nine appearances in the NBA finals. He was named the NBA’s “Most Valuable Player” three times, earned all-NBA First Team honors nine times, participated in 11 All-Star Games, and concluded his career as the league’s all-time assist leader. In 1994, he began his first year as the Los Angeles Lakers’ vice president.

Also an entrepreneur, Johnson is chairman and CEO of Magic Johnson Enterprises, which provides high-quality products and services primarily to ethnically diverse and underserved urban communities through strategic alliances, investments, consulting, and endorsements.

In 2012, Johnson joined a partnership that purchased the Los Angeles Dodgers baseball team. He has also teamed up to build a new stadium and bring an NFL team back to Los Angeles, along with thousands of jobs.

He is also chairman and founder of the Magic Johnson Foundation, which promotes HIV/AIDS awareness and prevention programs, community empowerment centers, and the Taylor Michaels Scholarship Program.

An Evening with Magic Johnson

“I was extremely pleased with your performance and overwhelmed that you hit every single key message about McDonald’s that I gave you. You definitely exceeded our expectations.”
-– McDonald’s Corporation