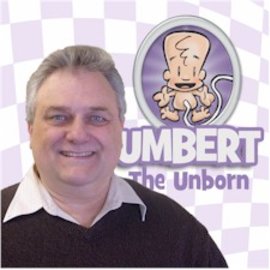 Cangemi possesses a vivid imagination. He is a passionate speaker and an illustrator. He has illustrated Umbert as an astronaut and a deep-sea diver. He's got him using a computer connected to the "Interwomb" to send "pre-mail," playing sports and even hosting his own game show - "Unborn Babies in Jeopardy." He's also drawn an embryonic version of Umbert. "I want to show that Umbert is a person at all phases," Cangemi said. "There is no trimester in which Umbert becomes a person. He's a person from the moment of conception." The cartoon has resonated well with a variety of audiences - pro-life advocates, expectant mothers and fathers, and children. One 7-year-old boy from Kentucky wrote to ask when Umbert was going to be born.

"He's been in there long enough," Kevin wrote. "Don't you think it's time for him to be born?" Cangemi wrote back saying that, like Charlie Brown, Umbert is a cartoon character who is frozen in time. He told him that if Umbert is born, the cartoon will end, and he made Kevin a promise. "I promised him that the day all unborn children have the legal right to be born, that will be Umbert's birthday," Cangemi said. "It's a promise that I hope I will live long enough to keep."

The cartoon is currently read by more than 400,000 readers nationwide. It has been picked up by approximately 20 publications as well as many parish bulletins. In December, Circle Media (the Register's parent company) will publish Umbert the Unborn: A Womb with a View. The book features a collection of 120 full-color cartoons as well as a series of page-by-page illustrations of Umbert developing from a single cell to a full-term baby and an array of Umbert's educational facts of life. Cangemi, who has three children of his own, hopes the book can help educate children and change hearts and minds on the issue of abortion in a non-threatening way. "If we can raise a whole generation of children respecting life - for whom it would be inconceivable to want to kill Umbert, the tide will turn," he said.

Defending the Unborm, Message for Our Youth

Umbert the Unborn - A Womb with a View

"Charles Schulz was the first cartoonist to introduce Christian themes into a mainstream art form," Cangemi said. "I see Umbert as a kind of prenatal Bob Hope, entertaining the front-line troops of the pro-life cause and giving them a much-needed morale boost."