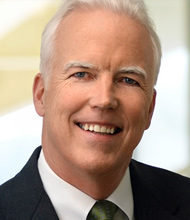 George Dom is a former naval officer and aviator with a career that included key leadership positions in high performance organizations, including four aircraft carrier fighter squadrons and commander of the air wing of the USS John F. Kennedy. He also was an instructor/pilot at the Navy Fighter Weapons School (Topgun) and commanding officer/flight leader of the Blue Angels. After leaving active duty, Dom became a business aviation consultant to Fortune 500 corporations, private companies and high net-worth Individuals.

Flying fighter jets in training and combat in the unforgiving environment of an aircraft carrier at sea — as well as high-speed and very low altitude formation acrobatics — was a unique thrill and privilege for George Dom. But what gave him the greatest lasting satisfaction was helping to build high performance leaders and teams. For an organization like the Navy where there is no "lateral entry", leadership development was not just the key to success, but crucial to survival.

Achieving individual and collective high performance requires High-Trust Leadership and Focused Engagement. This is true in sports, the military, medical teams, and in the business world. Through daily, deliberate, intentional effort, a culture of high-trust and fully engaged "wingmen" can be developed at all levels. A high-trust team is a "force-multiplier" achieving results exponentially greater than the sum of the individuals.

Dom founded NFS Leadership Consulting to help leaders improve their individual and organizational success through High-Trust Leadership and Focused Engagement. As a former coach with the Human Performance Institute, George can share the science behind developing what Dr. Jim Loehr refers to as Full Engagement: "the acquired ability to intentionally invest your full and best energy right here, right now."

The Culture of Trust

The Value Based Leadership

"Captain Dom delivered.  He gave an outstanding presentation today. Things he discussed during his presentation truly made sense to me, to my business."