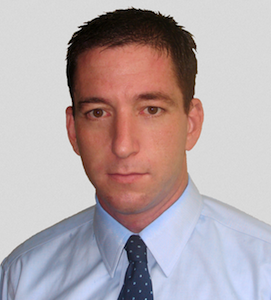 Glenn Greenwald has been a columnist for the US edition of The Guardian since August 2012. Prior to that he was a columnist for Salon.com and an occasional contributor to The Guardian. Greenwald worked as a constitutional and civil rights litigator before becoming a contributor (columnist and blogger) to Salon.com, where he focused on political and legal topics.[6] He has also contributed to other newspapers and political news magazines, including The New York Times, the Los Angeles Times,[10] The American Conservative,The National Interest, and In These Times.

Greenwald has written four books, three of which have been New York Times bestsellers: How Would a Patriot Act? (2006); A Tragic Legacy (2007), and With Liberty and Justice for Some: How the Law Is Used to Destroy Equality and Protect the Powerful, released in October 2011. He also wrote Great American Hypocrites (2008).

Greenwald has received awards including the first Izzy Award for independent journalism, in 2009,[15] and the 2010 Online Journalism Award for Best Commentary.[16] Greenwald is a frequent speaker on college campuses, including Harvard Law School, Yale Law School, the University of Pennsylvania, Brown University, UCLA School of Law, the University of Wisconsin, the University of Maryland and others. He also appears on various radio and television programs as a guest political pundit. Greenwald has appeared as a round table guest on ABC's Sunday morning news show "This Week", HBO's "Real Time with Bill Maher", Comedy Central's "The Colbert Report", NPR's "All Things Considered", as well as numerous times on C-SPAN's Washington Journal; Pacifica Radio's syndicated series Democracy Now! with Amy Goodman; on Public Radio International's To the Point; MSNBC'sRachel Maddow Show, "Morning Joe", The Last Word with Lawrence O'Donnell, Up with Chris Hayes, and Dylan Ratigan's "Morning Meeting"; Fox News' Special Report with Brit Hume;. Greenwald has been a regular guest on the Hugh Hewitt Show (and was a friend and favorite guest of Hewitt's frequent guest host, Dean Barnett) and on PBS's Bill Moyers Journal. Greenwald's first book, How Would a Patriot Act? Defending American Values From a President Run Amok, was published by Working Assets in 2006. It was a New York Times bestseller, and ranked #1 on Amazon.com both before its publication (due to pre-orders based on attention from 'UT' readers and other bloggers) and for several days after its release, ending its first week at #293.

A Tragic Legacy, his second book, examines the presidency of George W. Bush "with an emphasis on his personality traits and beliefs that drove the presidency (along with an emphasis on how and why those personality traits have led to a presidency that has failed to historic proportions)." Published in hardback by Crown (a division of Random House) on June 26, 2007 and reprinted in a paperback edition by Three Rivers Press on April 8, 2008, it too was a New York Times Best Seller, also ranking #1 for a day on Amazon.com's Non-Fiction Best Seller List and #2 the next day (also due to heavy "discussions and promotions by blogs—a campaign catalyzed by Jane Hamsher [at FireDogLake]", according to Greenwald).

His third book, entitled Great American Hypocrites: Toppling the Big Myths of Republican Politics, was published by Random House in April 2008, the same month that Three Rivers Press reissued A Tragic Legacy in paperback.[66][67] His fourth book, With Liberty and Justice for Some: How the Law Is Used to Destroy Equality and Protect the Powerful, was released by Metropolitan Books (of Henry Holt and Company) in October 2011. Over the past five years, a creeping extremism has taken hold of our federal government, and it is threatening to radically alter our system of government and who we are as a nation. This extremism is neither conservative nor liberal in nature, but is instead driven by theories of unlimited presidential power that are wholly alien, and antithetical, to the core political values that have governed this country since its founding"; for, "the fact that this seizure of ever-expanding presidential power is largely justified through endless, rank fear-mongering—fear of terrorists, specifically—means that not only our system of government is radically changing, but so, too, are our national character, our national identity, and what it means to be American."

Greenwald will leave the Guardian, where he's done the bulk of his reporting on the NSA's secrets, for a new venture funded by eBay founder (and Greenwald fan) Pierre Omidyar.

With Liberty and Justice for Some: How the Law Is Used to Destroy Equality and Protect the Powerful

"Glenn's presentation on the 1st Amendment was powerful and well received. Our students were graced with a presentation filled with content and laced with great humor."