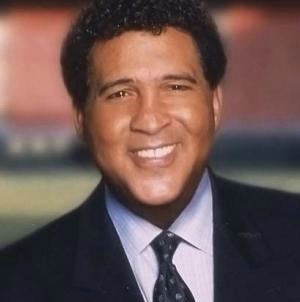 Greg Gumbel's standout work in the busy world of sports broadcasting has made his face, his name, and his voice as familiar as any in the industry. Across almost 40 years in the business, Gumbel has become one of the most outstanding and best known announcers in sports television. In the fall, he teams with his partner Dan Dierdorf to call exciting NFL play-by-play action across the country on CBS.

When the NFL season winds down, Gumbel switches from one premier sports attraction to another. During March Madness, Gumbel spends hours hosting in the studio with his colleagues, analysts Seth Davis and Greg Anthony, providing the latest highlights on the exciting Road to the Final Four.

In a broadcast career that began in 1973, Gumbel has seen tours of duty at Chicago's WMAQ-TV, ESPN, the Madison Square Garden Network, CBS Sports, NBC Sports, and now again at CBS.

His play-by-play resume includes the NFL, the NBA and college basketball, Major League Baseball, and the College World Series Championship, as well as having been the voice at various times for the New York Yankees, the New York Knicks, the Philadelphia 76ers, the Cleveland Cavaliers, and the Seattle Mariners.

When Greg Gumbel's not doing play-by-play or hosting on-air for CBS, he enjoys speaking to groups all around the country, sharing his motivational thoughts, ideas, and experiences from the world of sports.

Rewind, Review, and Replay Drawing from his nearly-40 years in the business

The Hilarious Side of Sports

An Evening with Greg Gumbel

"Greg's presentation is chock full of personal stories, anecdotes, and insights into the world of sports. This 40-minute talk included a short video clip. The audience was delighted."