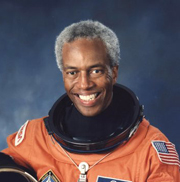 Dr. Guion S. Bluford, Jr., is Founder and President of The Aerospace Technology Group (ATG), an aerospace technology and business consulting organization specializing in aviation and space related technology development, analysis, and marketing related activities. Prior to joining ATG, Dr. Bluford was Vice President of Microgravity R&D and Operations for the Northrop Grumman Corporation and was responsible for all corporate microgravity research and technical development activities in support of NASA’s Human Exploration and Development of Space (HEDS) Enterprise. He also served as the Program Manager of the NASA Glenn Research Center’s Microgravity Research, Development, and Operations Contract (MRDOC). Headquartered in Cleveland, Ohio, Dr. Bluford was responsible for the design, development, integration, and operational support of the NASA Fluids and Combustion Facility and associated space flight experiment hardware for the International Space Station.

Prior to joining Northrop Grumman, he was Vice President of the Aerospace Sector of Federal Data Corporation (FDC) and was responsible for all NASA business. He has also been the Vice President of the Engineering Services Division of NYMA Inc. and Program Manager of the NASA Lewis Research Center’s Scientific, Engineering, Technical, and Administrative Related Services (SETAR) contract.

Prior to his service with Northrop Grumman, FDC, and NYMA, Inc., Dr. Bluford was a NASA mission specialist and payload commander astronaut on four Space Shuttle missions. He was selected in the first class of space shuttle astronauts in 1978 and was the first African American to fly in space in 1983 aboard Space Shuttle Challenger. In addition, he flew on a Spacelab flight as payload commander in 1985, a Department of Defense Strategic Defense Initiative Office flight in 1991, and a classified Department of Defense flight in 1992. He has over 688 hours in space.

Dr. Bluford received a Bachelor of Science degree in Aerospace Engineering from Penn State University in 1964 and Masters of Science and Ph.D degrees in Aerospace Engineering from the Air Force Institute of Technology in 1974 and 1978, respectively. He also has a Master of Business Administration degree from the University of Houston, Clear Lake, Texas and has attended the University of Pennsylvania’s Wharton School of Business.

He has been awarded the Department of Defense’s Superior Service, and three Meritorious Service Medals; the Air Force’s Legion of Merit, Meritorious Service, Commendation and ten Air Medals; NASA’s Distinguished Service, Exceptional Service, and four Space Flight Medals; the State of Pennsylvania’s Distinguished Service medal and thirteen honorary doctorate degrees. An AIAA Fellow, he was inducted into the International Space Hall of Fame in 1997.

The Importance of Math and Science Education in America

Minorities in Science and Engineering

Career Opportunities in Science and Engineering

“He was wonderful. As you had advised me, he is a very nice man. He was very accommodating to our requests. Everyone enjoyed his presentation and the time he took to sign autographs and speak with our youth. It was a pleasure working with you and I hope we have an opportunity to work with you again in the future.”