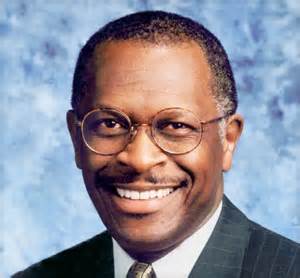 Herman Cain is candid and passionate about the importance of leadership from the boardroom to the voting booth. In his high-energy presentations, he addresses topics ranging from how to achieve success at the highest corporate levels to current political issues. Herman Cain is an exceptional leader whose experience has brought him to the pinnacle of both the corporate and political worlds, and he brings solutions to both of their most pressing problems. No matter what the consequences, Cain has made a habit of facing tough challenges head-on and succeeding no matter what the arena.

When Godfather’s Pizza was near bankruptcy, Cain became president and transformed it by providing focus and getting people personally engaged in the turnaround. When others doubted his political prowess, he ran for the U.S. Senate and made an impressive showing by providing bold leadership and a clear alternative to the status-quo on issues such as national security, the economy, Washington’s Tsunami spending, Social Security, Health Care reform, Immigration, and Energy Independence.

Not content to retire after his highly successful business career, Cain has launched himself into a successful media career where he is currently one of the most popular radio hosts in the southeast United States, and on television where he his shares his passion, charisma, and dynamism on FOX’s News and Business Channels. He is also the author of several books, including They Think You’re Stupid: Why Democrats Lost Your Vote and What Republicans Must Do to Keep It and Leadership Is Common Sense.Cain believes there is a better leader in everyone and that leadership is about recognizing the potential in yourself and others. In Leadership Is Common Sense, the reader is provided with the necessary tools to realize that potential. With infectious enthusiasm, Herman Cain demonstrates the value of having a dream with the motivation, determination and passion needed to achieve it.

How to Achieve Success at the Corporate Level

Family is the Key to Achieving a Thriving Community

"Herman Cain remarks were right on target. He was engaging, educational and overall a superb keynote speaker."