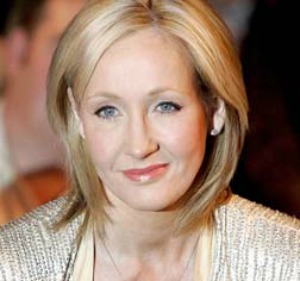 After studying at the University of Exeter in the fields of French and Classic Literature, Rowling worked as a researcher and bilingual secretary for Amnesty International. Her ultimate career success struck when she wrote the Harry Potter series and her much documented "rags to riches" story has since been told and retold exponentially.

Though she is currently considered one of the best success stories out there, and one of the world's all-time bestselling writers, she has experienced poverty, failure, and loss of her own. From the Harry Potter book series has sprung a hit movie series, multiple fashion collections, spin-off books, video games, and an entire online realm of 'Pottermore' that allows Potter lovers to continue their journeys.

She has received plenty of public praise including multiple British Book Awards for Best Book and Author of the Year, A 2011 British Academy Film Award for 'Outstanding British Contribution to Cinema,' and honorary degrees from Harvard, St. Andrews, Edinburgh and others.

JK Rowling's speech offers the perfect balance of inspiring words and engaging personal experiences. Looking back on her own experience as a young woman who had recently graduated university, Rowling discusses the benefits of failure and the importance of imagination.

The Power of Failure

An Evening with JK Rowling

"Phenomenal! Engaging... the best speaker we ever had. We enjoyed her presence, the friendship we developed and the energy she brought to our event."