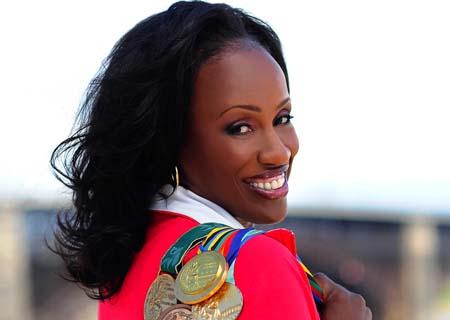 As one of the most decorated female athletes of all time, Jackie Joyner-Kersee dominated the track and field circuit for 13 years and won three gold, one silver, and two bronze medals spanning four Olympic Games during her illustrious career. At the 1984 Olympics in Los Angeles, she won the silver medal in the heptathlon.

The inaugural recipient of the Humanitarian Athlete of the Year, Joyner-Kersee is known worldwide for her interest in aiding others. She has helped to build the Jackie Joyner-Kersee Youth Center Foundation in her hometown of East St. Louis, Illinois, that has raised more than $12 million. In 2007, she - along with several notable athletes - founded Athletes for Hope, a charitable organization of professional athletes who get involved in charitable causes and inspire millions of non-athletes to volunteer and support their community.

Jackie Joyner-Kersee is the author of A Kind of Grace, in which she recounts how she overcame her difficult early years to rise to the top. A health advocate and humanitarian, she shares her life story and work with audiences around the country in inspirational keynotes.

Running the Race with Grace & Humility On & Off the Track

A Kind of Grace

"Jackie is extraordinary.  He presentation was inspirational and packed with great information."