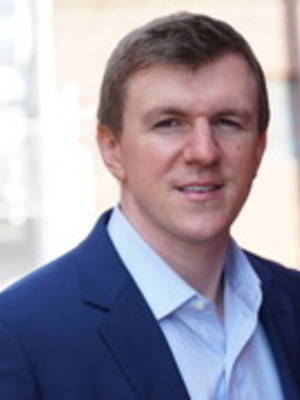 James O'Keefe is an award-winning journalist and writer. He is the founder and President of Project Veritas and Project Veritas Action The two non-profits are dedicated to investigating corruption, dishonesty, waste and fraud in both public and private institutions.

O'Keefe's investigations have led directly to the passage of new legislation, federal and state investigations, congressional inquiries, the de-funding of taxpayer-funded groups.

O'Keefe's series of voter fraud exposes inspired several states to reform their election laws, forced resignations in Washington, and pushed FBI and Department of Justice officials to defend themselves before federal lawmakers.

The Nation magazine wrote, "O'Keefe's influence on voting rights opponents and legislators alike is particularly jarring." Slate.com agreed, "O'Keefe has had more of an impact on the 2012 election than any other journalist."

The 2009 ACORN investigation led to the group's collapse. Other investigations led to a Planned Parenthood Vice President to be fired, National Public Radio executives to be fired, an Enroll America director to be fired, Medicaid worker re-trainings, an investigation into Battleground Texas, and Congressional field hearings into Obamacare navigator fraud. In 2017, his investigations into the DisruptJ20 movement led to the arrests of three individuals for conspiracy to commit assault at the National Press Club during the presidential inauguration.

In 2013, O'Keefe authored New York Times bestseller, Breakthrough: Our Guerilla War to Expose Fraud and Save Democracy, the inside story of the challenges he faced bringing his powerful new form of guerilla reporting to the forefront.

During the summer of 2014, an investigation by Project Veritas transformed the discussion on national security. Dressed as Osama bin Laden, James O'Keefe crossed the Rio Grande from Mexico into the United States. In a follow-up video, Project Veritas exposed the lack of security at the northern border as an investigator dressed as an ISIS terrorist crossed Lake Erie into Cleveland. In his grilling of officials from the Department of Homeland Security, Senator John McCain referenced the investigations as proof of the failure to secure the border.

Heading into the crucial fall elections of 2014, James O'Keefe launched Project Veritas Action, which launched investigations in four key Senate battleground states to expose the hypocrisy of candidates who were lying to the voters. All four Senate candidates lost on the way to the historic Republican Senate takeover.

During the 2016 election cycle, both Project Veritas and Project Veritas Action released videos exposing key Democrats not only admitting that voter fraud exists, but also showing how to successfully commit it on a massive scale. One result was that a New York City Democratic election commissioner was forced out of his position by Mayor de Blasio and the New York Assembly.

O'Keefe also released videos exposing how the Democratic National Committee and Hillary Clinton worked with consultants to organize paid protesters at Trump rallies, which sometimes erupted in violence. The investigation into Democracy Partners caused two key Democratic operatives to resign, sparked a response from the White House, and caused Donald Trump to bring up the videos in the final presidential debate. O'Keefe was ultimately credited with having a significant impact on the 2016 presidential elections for his October Surprise video series.

In January 2017, Project Veritas investigations led the FBI, CIA, and DC metro police to arrest and convict three individuals who planned to put butyric acid into the ventilation systems of the National Press Club.

Also, in 2017, O'Keefe investigations into CNN, became the #1 trending videos in the US. The hard-hitting investigation exposed CNN's anti-Trump bias and raised serious questions about the news organization's credibility. PV's New York Times investigations came next, forcing the Times to fire an irresponsible employee and change their social media policy.

His 2018 investigations into Twitter exposed their attempt to silence conservatives on their platform through a stealthy technique called "shadowbanning." Twitter engineers also admitted they would hand over Trump's personal Direct Messages to the DOJ.

2018 also saw the publication of O'Keefe's second best seller, American Pravda: My Fight for Truth in the Era of Fake News. One-part rollicking adventure story, another part spy thriller. The book details never-before-heard details of his hidden-camera investigations from 2015 through 2017, including the 2016 presidential elections and his groundbreaking American Pravda series.

In 2018, O'Keefe promised to investigate the deep state, releasing undercover videos within multiple government agencies such as the DOJ, DOS, GAO, and HHS. This video series resulted in responses from each and every agency, multiple government employees were removed from their positions and a reaction from Secretary of State Mike Pompeo on Fox News.

Project Veritas made First Amendment history in December of 2018 when the US District Court for the District of Massachusetts ruled in Project Veritas's favor and deemed that the Massachusetts law prohibiting the secret recording of public officials was unconstitutional.

2019 kicked off in a new direction for Project Veritas, with the launching of the "Be Brave" campaign and its focus on recruiting insiders at organizations to come forward to Project Veritas and expose the corruption they are witnessing firsthand. With this effort, O'Keefe made it clear that a bullseye was on Silicon Valley and put them on watch yet again.

Insiders from Pinterest, Google, and Facebook came forward to Project Veritas to blow the whistle. Following an exposé showing Facebook's "Deboosting" strategy, O'Keefe took the stage at CPAC in Washington, DC to massive applause and praise from the crowd. In the weeks following, Pinterest software engineer Eric Cochran gave explosive evidence to the actions Pinterest was taking in censoring Pro-Life content from LiveAction. Google engineers Greg Coppola and Zach Vorhies revealed Google's not so hidden agenda in "Algorithmic fairness", news blacklists, and "human raters." With the protection of Project Veritas, Vorhies provided the Department of Justice with over 950 pages of leaked documents. Project Veritas' revelations into Big Tech have shaken Silicon Valley and spurred discussion in Congressional hearings; notably from Senator Ted Cruz and Rep. Dan Crenshaw, who blasted Google executives about what they saw on Project Veritas' videos.

The culmination of these successes resulted in O'Keefe attending a White House Social Media Summit. At the summit, President Donald Trump called on James to stand up so that others could recognize him and thanked him personally for his work. President Trump remarked, "Somebody said he's controversial. He's not controversial, he's truthful! He's truthful! That was a great job. That was one of many, thank you very much.".

2019 has also brought new investigations across the country into voter fraud and the arrest of a double voter when charges were filed by the Attorney General of New Hampshire.

O'Keefe is a graduate of Rutgers University. He founded an independent newspaper in College called The Centurion. He is a 2014 recipient of the Young Professional Conservative Leadership "Buckley Award" awarded to "young professionals in recognition of significant achievements in advancing the conservative cause." He is the recipient of the Robert Novak Award for Journalistic Excellence (2011), has been named "Fox News Power Player of the Week" twice, and was on the Forbes "30 Under 30" for media moguls.

Breakthrough: Our Guerilla War to Expose Fraud and Save Democracy

American Pravda: My Fight for Truth in the Era of Fake News

"James O'Keefe's presentation was very entertaining and informative. He stayed on topic and was respectful of the time frame of our event which we greatly appreciated. Our attendees really enjoyed his presentation."
--Marie, New Jersey Right To Life