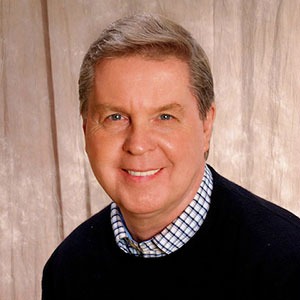 James "Jim" R. Cymbala is an American author and pastor of the Brooklyn Tabernacle. He is also a former college basketball player, serving on the teams for the United States Naval Academy and the University of Rhode Island. Cymbala has been the pastor of The Brooklyn Tabernacle for more than twenty-five years. The author of the best-selling titles Fresh Wind, Fresh Fire; Fresh Faith; and Fresh Power.

In the autumn of 1971, Jim Cymbala and his wife Carol took over the leadership of The Brooklyn Tabernacle on Atlantic Avenue in downtown Brooklyn. The small, struggling congregation numbered less than 30 people and met in a small run-down building surrounded by the physical and moral blight of the inner-city. But this was where God had placed them and they very soon realized that it was a unique opportunity to see the power of the Gospel in action by loving and ministering to all colors and kinds of people.

Most were poor and many struggled with the typical inner-city problems of drug and alcohol abuse or the pain of disintegrating families. No money was available for salaries during most weeks so Cymbala and his wife took second jobs and struggled to make ends meet both in the church and at home.

Right away, they realized the necessity of real prayer to secure God's grace and power in their work. The Tuesday Night Prayer Meeting, though very small at the start, became a central feature in the life of their church and has remained so to this day.  Although geographically located in America, the interracial makeup of the New York City area, along with the challenging social problems and urban decay, make it a kind of "forgotten mission field."

Most church buildings were nearly vacant on Sundays since their once-strong congregations (and their denominations) had long before fled to suburbia. But Cymbala and his wife knew that this was the very spot where God's love could meet the most desperate of human needs. Realizing the limited impact that any one church can have in a large metropolis like New York, they began to plant churches in other needy areas of the city.

As Cymbala and his wife trained their own pastors and sent them out with small groups of workers from the Cymbala's own congregation, Cymbala started a replication of the work that his wife and him had begun in downtown Brooklyn. They church then began to reach out financially and in prayer to see other areas in New York City be impacted by God's love through the planting of Daughter Churches, of which there are now six in the New York Metro area, all to the glory of God.

At that same time, Cymbala and Carol began to look beyond our own locale to plant missionary stations in impoverished places like Haiti, Peru, a poor neighborhood in the Dominican Republic as well as in Israel. The leadership for these works has been raised up by God from their own congregation which itself represents so many parts of the world. These missions have seen a demonstration of the far-reaching power of the Gospel of Jesus Christ.

After serving the Lord for over 20 years in their former site on Flatbush Avenue, Cymbala and Carol were able to purchase a theater in downtown Brooklyn in May of 1998 in which to relocate our Sanctuary and office space followed by 3 floors of a commercial condominium purchased in 2002.

The combination of these two buildings constitute our New Smith Street Campus and provide them with over 250,000 square feet in which to house all the important ministries needed to reach the community. The combination of drugs, violent gangs, and broken homes has devastated the young people of our city. In these recently renovated buildings, we provide a place of refuge for youth and young adults called “The Summit”, in addition to ministry to children, pre-teens, seniors and married couples.

In summary, the Lord has greatly helped Cymbala and Carol in seeing the multitudes here and elsewhere turn to Christ for salvation. They share in the feelings of Jesus as He looked on the crowds and then "had compassion on them because they were harassed and helpless, like sheep without a shepherd." (Matthew 9:36) Cymbala is asking Him not only for the workers needed for the harvest field but also for all the resources needed to see His Name and Gospel glorified throughout the whole earth.

"Pastor Cymbala was the best speaker we ever had!  I recommend him to any group wanting results."