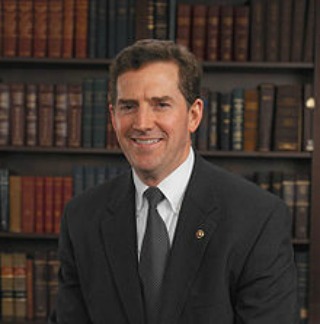 Since his first campaign for Congress in 1998, Jim DeMint has proven to be a principled leader that has fought to secure South Carolina's and America's future.

Elected as South Carolina's 55th senator in 2004, DeMint quickly established himself as one of the most effective conservative leaders in Washington, seeking to enact innovative solutions to improve America for future generations. He has been a tireless advocate for smaller government, individual liberty, a strong national defense and traditional values.

DeMint has earned national acclaim for his work to end the system of earmarks, also referred to as the "congressional favor factory." Following the November elections in 2006, the senator stood up against big spenders in Congress and stopped over 10,000 wasteful pork projects. Famed Washington journalist Robert Novak called him a "hero." Wall Street Journal editor Steve Moore said the senators actions saved Americans about $17 billion and called him the "taxpayers' greatest ally." In early 2007 DeMint also fought for commonsense immigration reform by leading the effort to defeat the amnesty bill and calling on government to first secure our borders, enforce the laws already passed, and streamline the legal immigration system.

In late 2006, he was elected as chairman of the Senate Steering Committee, which is comprised of the majority of Republican senators and works to advance conservative legislation. Last year, just as Ronald Reagan had done over 20 years earlier, DeMint delivered the keynote address to the nations largest gathering of conservative activists at the annual Conservative Political Action Conference (CPAC). He was recently ranked as the Senate's most conservative member by National Journal and as the No. 1 senator voting for responsible tax and spending policies by the National Taxpayers Union. DeMint understands the greatness of a country is found in its people and values, not in its government.

DeMint announced his resignation from the Senate, effective December 31. He plans on taking over as the head of the Heritage Foundation, a conservative think tank research organization.

He and his wife, Debbie, reside in Greenville, SC and are the proud parents of four married children. They are also greatly enjoying their new role as grandparents.

Pushing Back the Progressive Agenda

An Evening with Senator DeMint

"Senator DeMint delivered a perfect 10 speaker for our audience. His remarks were on target, covering precisely what we intended him to do."