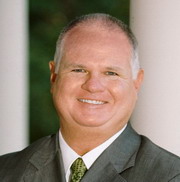 Jim “The Rookie” Morris is the top inspirational and motivational speaker on the public speaking circuit. His Cinderella story serves as testimony to the power of dreams and their ability to inspire and transform human life. Jim’s meteoric rise from 35 year old high school teacher to flame throwing major league pitcher in 3 months made cinematic history with the release of “The Rookie” starring Dennis Quaid. This heartwarming and unforgettable Disney blockbuster about chasing your dreams and keeping your promises won the ESPY for Sports Film of the Year. Sports Illustrated also voted it one of the five greatest baseball films ever made. Let it be said that Jim Morris the speaker is more entertaining than the legendary film about his life.

Imagine having a regular guy like Tom Hanks over to your house for a cup of coffee and you’ll have a good idea of what to expect from this dynamic speaker and storyteller. Jim draws lessons from his own life experience to inspire others to become mentors and leaders in their own lives and to chase their dreams. His rare quality of being a great entertainer and a sincere down to earth person at the same time makes him a compelling speaker to audiences of all types. Audiences are also charmed by his sense of humor and comedic timing as well. On a regular basis, customers will comment that “he is the best speaker that we’ve ever had,” or ask “how are we going to top this next year?” Jim has participated in such prestigious speaking events as The Million Dollar Round Table, numerous other speaker showcases, and he is also the author of The Rookie.

Jim is particularly good at weaving the needs of his customers into his presentation and works hard to please his customers. He receives standing ovations wherever he goes. Despite his enormous success as a speaker, he has remained genuine and developed a reputation among audiences as being a regular, approachable guy who hangs out with customers. If you are looking for someone who will connect with your group, Jim Morris is your guy.

A school teacher by trade, Jim is a loveable storyteller who captivates and inspires others to step up and change their lives!

Never Giving Up on a Dream

Finding a Mentor and Becoming a Leader

Remembering Who You Are

Learning How to Laugh at Yourself

Visit this Speaker's Website
Fee Range
Travels from
https://www.youtube.com/watch?v=-5ZWnHPLnRw
Books by this Speaker