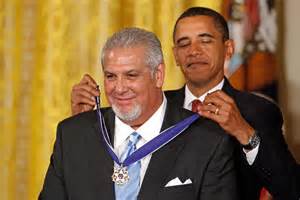 A Cuban born in the United States by chance, Dr. Pedro Jose Greer, Jr., had a vision that changed his life and the lives of thousands of Miami's residents.

Initially, Dr. Greer only had a broad vision to "save the world" that was driven by passion without any specific direction until, in 1984, he encountered a homeless man suffering from tuberculosis. The encounter changed the course of Dr. Greer's life. Though there was little he could do to medically help the homeless man, he knew there was plenty he could do to help him through his last moments in life. Since his own sister's death four years earlier, Dr. Greer had made a commitment never to let anyone die or suffer alone. He spent four days looking for the man's family, and although the search was unsuccessful, it turned out to be providential when it led him to Camillus House, a shelter for the homeless.

Appalled that America was not only the home of the free but also of the homeless, and that people in his own backyard were too poor or ignorant to seek medical treatment, Dr. Greer's vision of how he could improve the lives of people in this community gelled. He knew a clinic to treat the poor and homeless populations of Miami was needed. He quickly opened up Camillus Health Concern (CHC), as it is now known, and began persuading the poor and homeless to come in for treatment. "Young and stupid" as Dr. Greer describes himself then, he ignored his own personal safety as he scoured the mudflats under the bridges and highways to tell alcoholics, drug addicts, and other down-and-outers living there in crates and boxes about his free clinic.

For the first four years that he ran the clinic, Dr. Greer had no financial support for his vision. The sign-up office at Camillus House became an exam room, and he turned the cafeteria into a waiting room. He scavenged for furnishings, supplies, and medicines and relied on a completely volunteer staff. In order for CHC to thrive and grow, however, some financial support was necessary. He became a quick study in applying for grants and gaining support from others in the medical community. Because of Dr. Greer's efforts, almost 100 physicians are now serving the homeless and indigent populations in Little Havana and South Miami Beach.

Due to the increasing number of undocumented aliens in the Miami area, Dr. Greer also founded the Saint John Bosco Clinic in 1991 in the back of a church by the same name in Little Havana; he currently serves as Medical Director of the clinic. A gastroenterologist and hepatologist, Dr. Greer currently serves as Assistant Dean for Homeless Education at the University of Miami School of Medicine and Chairman of Digestive Management at Mercy Hospital, where he maintains a private practice with his father. Additionally, he is Medical Director of Mercy Mission Services and has been an advisor to both the Clinton and Bush Sr. administration.

Dr. Greer has also used his appointment as the first assistant dean of homeless education at the University of Miami School of Medicine to help expand his vision for CHC. The clinic also serves as a model clinic for the poor, as well as a required rotation for medical students allowing the advocacy for those in need to continue. Dr. Greer emphasizes that his vision for CHC is not about him. It is a "mission driven by passion," and his ultimate goal is to make the need for CHC obsolete. Nevertheless, Dr. Greer's impact on the lives of the poor in South Miami has been great. CHC is now a multi-story center named for his deceased sister and treats more than 10,000 indigent men, women, and children each year.

Dr. Greer's autobiography, Waking up in America: How One Doctor Brings Hope to Those Who Need It Most, details his early years as a physician from taking care of the homeless under the bridges to advising in the Bush and Clinton administrations. He has published over 25 articles and book chapters ranging from digestive disorders to issues of policy and poverty in America and has been featured on ABC, CBS, NBC, and FOX Family Channel. He hosted a segment for the PBS Travel Channel, HBO's documentary "AMERICANOS," the PBS/BBC series "Medicine at the Crossroads,'' and has been a guest on various talk shows.

The recipient of numerous leadership honors, Dr. Greer has received three Papal medals "Pro Ecclesia ET Pontifica" and was knighted as a Knight of Malta and the Order of Saint Gregory the Great. He is the recipient of many awards, including the highly prestigious MacArthur "Genius" Fellowship, the Presidential Service Award (presented by Presidents Clinton, Bush, Carter and General Powell) at the 1997 Presidential summit in Philadelphia and in 2009 he received the Presidential Medal of Freedom. In 1994 he was named by Time Magazine as one of "America's 50 Young American Leaders Under 40." The following year he received the CBS/Newsweek Achievement Award at the Kennedy Center. He was named the 1996 Doctor of the Year for Teaching by the magazine Hippocrates: Health and Medicine for Physicians.

Currently Dr. Greer serves as a Trustee at the RAND Corporation, America's oldest and largest think tank; a board member at the Mellon United Bank of Florida; Chairman Elect for the Hispanic Heritage Awards Foundation in Washington, D.C., a Kennedy Center event); a board member of Comic Relief; and Chairman, Camillus Health Concern; and other national organizations. He has previously served on the Board of Dr. Pepper/7-Up, Physician for Human Rights, the Cuban American National Council.

Dr. Greer completed his undergraduate studies at the University of Florida, Medical studies at La Universidad Catolica, Madre and Maestra. He completed all postdoctoral studies at the University of Miami, where he was Chief Medical Resident and a fellow in Hepatology at the Center for Liver Diseases; a fellowship in Gastroenterology, earning two post-doctoral fellowship; and a member of AOA Honors Medical Society. He is currently a Fellow of the American College of Physicians and the American College of Gastroenterology and has received various Honorary Doctoral degrees.

Lecturing at such prestigious academic institutions as Harvard, Emory and the University of Florida, Dr. Greer has also been commencement speaker for the New York Medical College, the University of Miami and East Tennessee State Medical schools, as well as other undergraduate institutions.

Even now that he is a nationally acclaimed advocate, a member of prestigious boards and a frequent and energetic lecturer, Dr. Greer says his greatest lessons still come from his poorest patients. Through his leadership and vision, he has proven that one person can inspire and create change in his community.

Waking up in America: How One Doctor Brings Hope to Those Who Need It Most

"Outstanding!  The perfect speaker to kick off our conference."