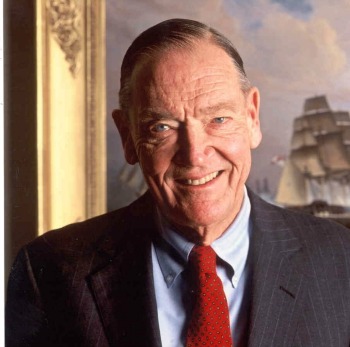 The Vanguard Group is the largest mutual fund organization in the world. Headquartered in Malvern, Pennsylvania, Vanguard comprises more than 160 mutual funds with current assets totaling more than $1.4 trillion. Vanguard 500 Index Fund, the largest fund in the group, was founded by Bogle in 1975. It was the first index mutual fund.

In 2004, TIME Magazine named Bogle as one of the world’s 100 most powerful and influential people and Institutional Investor presented him with its Lifetime Achievement Award. In 1999, FORTUNE designated him as one of the investment industry’s four “Giants of the 20th Century.” In the same year, he received the Woodrow Wilson Award from Princeton University for “distinguished achievement in the nation’s service.” In 1997, he was named one of the “Financial Leaders of the 20th Century” in Leadership in Financial Services (Macmillan Press Ltd., 1997).

Bogle is a best-selling author, beginning with his first book, Bogle on Mutual Funds: New Perspectives for the Intelligent Investor (Irwin Professional Publishing, 1993). Irwin is also the publisher of John Bogle and the Vanguard Experiment: One Man’s Quest to Transform the Mutual Fund Industry, by Robert Slater (1996). Common Sense on Mutual Funds: New Imperatives for the Intelligent Investor (John Wiley & Sons, 1999), John Bogle on Investing: The First 50 Years (McGraw-Hill, 2000). Character Counts: The Creation and Building of The Vanguard Group (McGraw-Hill, 2002).

Bogle served as chairman of the board of governors of the Investment Company Institute in 1969-1970 and as a member of the board from 1969-1974. In 1997, he was appointed by then-U.S. Securities and Exchange Commission Chairman Arthur Levitt to serve on the Independence Standards Board. In 2000, he was named by the Commonwealth’s Chamber of Commerce as Pennsylvania’s Business Leader of the Year.

He has served as chairman of the board of the National Constitution Center from 1999 to 2007 and was a director of Instinct Corporation, a member of The Conference Board’s Commission on Public Trust and Private Enterprise and a member of the American Philosophical Society and the American Academy of Arts and Sciences.

The Battle for the Soul of Capitalism

"Mr. Bogle spoke at our national sales meeting and even though salespeople are notorious for being quite cynical and hard to impress, John had an amazing impact on us all! He is a very interesting and thought-provoking person and left us all feeling very motivated. His honesty and integrity were a breath of fresh air!"