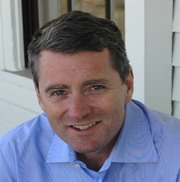 At age 35, John left an executive career track at Microsoft Corporation to form Room to Read, a nonprofit organization that “combines the heart of Mother Theresa with the scalability of Starbucks” to help children across the developing world break the cycle of poverty through the power of education. Razor-sharp business acumen honed at Microsoft, combined with a passion to change the world makes John Wood a unique, inspiring and popular speaker with universal appeal.

John founded Room to Read out of deep concern that nearly one billion people lack basic literacy and over 75 million children in the developing world are not enrolled in school. “I was blessed with a solid education which was a wonderful foundation for my future. As a result, I had a great career at a company that encourages people to dream big dreams. I started this organization as a way to give that same opportunity to children in the world’s poorest places. Education is a hand up, not a hand out. It is within our power to be the generation that ends poverty, so we need to think big and execute flawlessly.”

Since its start in 2000, Room to Read has sponsored the opening of more than 440 schools and 5,100 multi-lingual libraries across the developing world. The organization has distributed over 4.2 million children’s books in multiple languages and supports more than 4,000 girls with longterm scholarships. John describes these results as “total tip of the iceberg” as Room to Read plans to increase this literacy network to 20,000 libraries and schools serving at least 10 million children by the year 2020. The organization currently operates in eight countries in Asia and Africa, ranging from Nepal to Sri Lanka to South Africa, and is in the process of setting up programs in Bangladesh.

John raised over $80 million of financial commitments from a “standing start” and illustrates this experience in his award-winning memoir, Leaving Microsoft to Change the World (Harper Collins 2006), a book described by Publishers’ Weekly in a starred review as “an infectiously inspiring read.” Translated into 18 languages, it is popular with entrepreneurs, philanthropists, educators, and internationalists alike, selected by Amazon.com Editor Picks as a Top Ten Business Narrative of 2006 and voted by Hudson Booksellers as a Top Ten Nonfiction title of 2006. The book was also featured during John’s appearance on The Oprah Winfrey Show and the resulting “Oprah’s Book Drive” with Room to Read raised over $1 million from viewers.

During his career at Microsoft, John ran significant parts of the company’s international business divisions, including positions as: Director of Marketing for the Asia-Pacific Division, Director of Marketing for Microsoft Australia, Director of Business Development for the Greater China region. John holds a Masters in Business Administration from the Kellogg Graduate School of Management at Northwestern University, a B.S. in Finance from the University of Colorado, and an Honorary Doctorate in Humane Letters from the University of San Francisco.

A Passion to Change the World Through the Power of Education

Leaving Microsoft to Change the World

A Passion to Change the World and Change Your Life

"Great speaker.  Amazing content... this is an inspirational story the world needs to know."