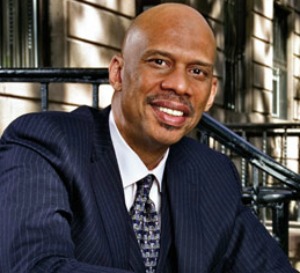 NBA Hall-of-Famer Kareem Abdul-Jabbar is the NBA’s all-time leading scorer, having amassed 38,387 points over a 20-year career with the Milwaukee Bucks and the Los Angeles Lakers. He won six NBA championships and was league MVP a record six times, while also being selected to a record-setting 19 NBA All-Star teams as well as to the NBA’s 50th Anniversary All-Time Team. He received the very first Naismith College Player of the Year Award in 1969 and has been dubbed by ESPN as “The Best Collegiate Player of the 20th Century” and “History’s Greatest Player” by magazine.

Since retiring from the game, the man who perfected the “skyhook” has become a speaker, author, film-maker, and educator. On January 18th, 2012, Secretary of State Hillary Rodham Clinton appointed Abdul-Jabbar as a Global Cultural Ambassador.

As a U.S. Global Cultural Ambassador, Abdul-Jabbar’s mission is to travel the world and engage underserved youth through special programs and open a dialogue which promotes American history and culture.

A seven-time New York Times best-selling author, Abdul-Jabbar's book titles include Giant Steps, Kareem, Black Profiles in Courage, A Season on the Reservation, Brothers in Arms, and On the Shoulders of Giants: My Journey Through the Harlem Renaissance. His latest book, What Color is My World-The Lost History of African American Inventors, is being used to teach children about STEM Education (Science, Technology, Engineering & Math) in elementary schools all over the United States. Abdul-Jabbar is also an ESPN.com columnist and writes for numerous other magazines and websites.

Abdul-Jabbar recently adapted his book, On the Shoulders of Giants – the story of the greatest basketball team you've never heard of - into a critically acclaimed documentary of the same name which aired on Showtime, Time Warner and Netflix in 2012.

In 2011, President Obama honored Abdul-Jabbar with the Abraham Lincoln Medal in a special ceremony held at Ford’s Theater. The medal honors those who exemplify the character and lasting legacy of President Abraham Lincoln. Abdul-Jabbar continues his commitment to education through his Skyhook Foundation, which is dedicated to developing & sharing teaching programs that bridge sports and education together.

Sports Motivational: On the Shoulders of Giants

"Kareem’s talk was truly an inspiration to all in attendance and he fulfilled the legacy of Harold M. Cotton whose mission was to promote tolerance and understanding amongst diverse groups. Judging by the diversity of the audience we know his message rang true. It was indeed a pleasure to host Kareem Abdul-Jabbar."