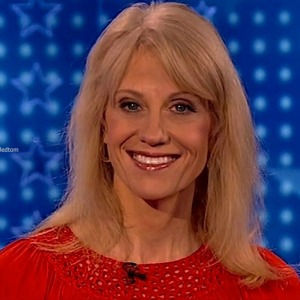 A Republican strategist & Founder and President of The Polling Company, a privately-held, woman-owned corporation founded in 1995, Kellyanne Conway is one of the most quoted and noted pollsters on the national scene.   Her polling data and op-eds have been published by The Wall Street Journal, The Washington Post, The New York Times, The New York Post, The Washington Times, USA Today, National Review, Human Events, Investors’ Business Daily, and Politico. She is the Editor and Publisher of WomanTrends Online, a web-based publication that provides the latest news on a multitude of current and prospective lifestyle, financial, health, ethnic, work, entertainment, green, technological, and generational trends, which are influencing and influenced by consumer attitudes and behaviors.  She is a sought-after speaker on the National Lecture Circuit.

Accomplishents:Conway was recognized as the most accurate predictor of the 2004 elections and received The Washington Post’s “Crystal Ball” award. Conway provided commentary on over 1,200 television shows onABC, CBS, NBC, PBS, CNN, CNBC, MSNBC, HBO, Comedy Central, MTV and the Fox News Channel, and numerous radio shows and print stories. Conway has also worked for leaders such as the late Congressman Jack Kemp; former Vice President Dan Quayle; Speaker of the House Newt Gingrich; Senator Fred Thompson. Conway has been profiled in over a dozen magazines, newspapers, and television programs.

She engaged the audience.  She was entertaining and educational."