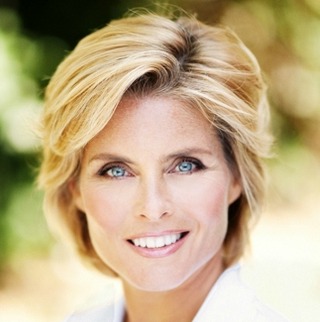 Most people know Kim Alexis for her captivating physical beauty, but there's more to her story than meets the eye. Her lifelong commitment to athletics, her stature as one of the world's first supermodels, her extensive experience in front of the camera, and her own encounters with physical trials have molded her into a woman uniquely equipped to speak to issues of fitness and women's health with real solutions. They also make her a natural fit for speaking engagements and commercial endorsements. Kim Alexis was born and reared in upstate New York. Always competitive, Alexis was deeply involved in junior high and high school athletics and had planned a career in pharmacology.

At the age of 18, she was "discovered" by the Elite Talent Agency. She soon moved to New York City and thus began an unbelievable career in the modeling industry. In fact, it's as though the term "supermodel" was coined to describe her.

She quickly made her mark in the modeling industry, earning a stint as Revlon spokesperson, doing countless TV and print ads, and gracing the cover of over 500 magazines, not to mention six appearances in the coveted Sports Illustrated swimsuit issues.

More than just a model, Alexis parlayed her good looks and bright mind into other opportunities, including broadcast journalism, where she hosted several television shows, and film and TV acting.

As her career has progressed, she's never lost her love of fitness. In recent years, she's focused on health and wellness issues for women, specifically by developing several fitness aids.

"Kim Alexis delivered a powerful and inspiring presentation. It was all about Life and not Kim. We truly appreciated that."