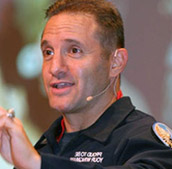 Motivational keynote speaker Waldo Waldman – The Wingman – is a motivational speaker and author of the New York Times and Wall Street Journal bestseller Never Fly Solo. He teaches organizations and individuals how to build trusting, revenue producing relationships with their employees, partners, and customers while sharing his experiences as a combat decorated fighter pilot and businessman.

The Wingman at Aviano Air Base before a mission to Kosovo

Waldo overcame massive claustrophobia and a fear of heights to become a fighter pilot with over 65 combat missions and 2,650 flight hours. He was deployed all over the world and flew missions in Iraq enforcing the “No-Fly Zone” and in Yugoslavia during Operation Allied Force. Waldo has been awarded five Air Medals, two Aerial Achievement Medals, four Air Force Commendation Medals, and two Meritorious Service Medals.

A graduate of the U.S. Air Force Academy, he also holds an MBA with a focus on Organizational Behavior.  Waldo is a former top producing sales manager who successfully led national sales efforts for several cutting edge technology and consulting firms before becoming a motivational speaker and performance consultant.Waldo CPAE small stage

Waldo was recently inducted into the National Speaker’s Association Speaker Hall of Fame, also known as the Council of Peers Award for Excellence (CPAE), the  award honors speakers who have reached the top echelon of platform excellence.  It has been bestowed on less than 200 speakers worldwide since 1977.  Waldo is also a Certified Speaking Professional (CSP), which is the highest earned designation recognized in the professional speaking industry. Only 7% of all professional speakers hold this exclusive designation.

Waldo believes that the key to building a culture of trust lies with your wingmen – those who help you to overcome obstacles, adapt to change, and achieve success. In business and life, you should never fly solo! The ability to win when the heat is on lies in the ability of every wingman in your organization, regardless of their role, to support the team and be 100% committed to the mission.

Audiences connect with Waldo not only because of his extensive business background, but also because he speaks from the heart and has an infectious passion for helping people. Through his motivational keynotes and leadership seminars, he applies the same principles that guaranteed his success in the competitive world of aerial combat to business and life. His message is simple – whether achieving victory as a fighter pilot or in business, the same qualities that ensure success apply: courage, accountability, preparation, integrity, teamwork, and a commitment to excellence!

A high energy motivational keynote speaker, Waldo was ranked one of the Top 40 under 40 Business Leaders in Georgia and has been featured on Fox & Friends, CNN, CNBC, MSNBC, The Harvard Business Review, the Wall Street Journal, Investor’s Business Daily, Entrepreneur Magazine, Success Magazine, Inc. Magazine, Business Week, and many other media outlets. In addition to his professional speaking business, he is also the founder and President of The Wingman Foundation, a 501(c)(3) whose mission is to raise funds and awareness for soldiers, veterans and their families in need.

“You were the best speaker we have had, which is quite the endorsement since all of our previous speakers were outstanding.  You informed, instructed, and inspired us, and are a great role model of a person who overcame real fears to achieve their real passion.”