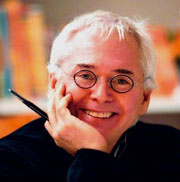 "When my three sisters and I were growing up near Erie, Pennsylvania, our grandmother Thora told us the most wonderful stories. Back then I never dreamed I would grow up to tell stories of my own," says Marc Brown. "But when my first son, Tolon, was born, I started telling him stories. One night our story was about an aardvark named Arthur." Now, Arthur is the star of a series of bestselling books and Emmy award-winning television series on PBS.

Most of the characters in Marc Brown's books are modeled after one person or a combination of people from his life. Many characters were inspired by people he knew when he was growing up and going to school in Erie, Pennsylvania. As for story ideas, Marc Brown looks to his own three children, Tolon, Tucker, and Eliza, for inspiration. (By the way, look for these three names hidden in Arthur Adventure books, along with the names of people and places Marc has visited.) He also gets many suggestions from children he meets in schools, libraries, and bookstores around the country. "The most interesting and funniest things," says Brown, "happen in real life."

Marc Brown lives on Martha's Vineyard and in New York City with his wife, author and illustrator Laurie Krasny Brown. Marc and Laurie are the creators of the critically acclaimed series Dino Life Guides for Families, which includes, When Dinosaurs Die, Dinosaurs Divorce, Dinosaurs Alive and Well! and Dinosaurs to the Rescue!, as well as their helpful and informative book How to Be a Friend: A Guide to Making Friends and Keeping Them and What's the Big Secret? Talking About Sex with Girls and Boys.

“Wonderful, Marc was terrific. Everyone had a great time and the meeting went well. Thank You again for all your help.”