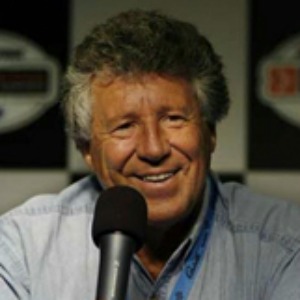 Mario Andretti and his twin brother, Aldo, were born in Montona, Italy. World War II broke out around the time they were born, in February 1940. When the war ended, the peninsula of Istria, where Montona was located, became part of Yugoslavia. So they were trapped inside a Communist country. For seven years, from 1948 to 1955, the family lived in a refugee camp. They waited several years for U.S. visas. And when they finally came through, the Andretti's left all their belongings behind and sailed to America in June 1955. Settling in Nazareth, Pennsylvania, the family of five had $125 among them and didn't speak English.

The twins worked in the uncle's garage after school and in 1959 began racing a 1948 Hudson Hornet Sportsman Stock Car. They took turns behind the wheel and in their first four races, each won twice. In the last race of the season, Aldo crashed, fracturing his skull. But he returned to the sport a year later and raced another 10 years. He retired in 1969 after another major accident caused him substantial injuries.

Meanwhile, Andretti's career flourished as he won 20 races in the modified stock class in his first two seasons. He entered his first Champ Car event in Trenton, New Jersey, on April 19, 1964, where he finished 11th after starting 16th. A year later, he won his first Champ Car race- - the Hoosier Grand Prix - - and earned Rookie of the Year honors at the Indianapolis 500 (with a third place finish). He went on to win the first of his four Champ Car national championships. Andretti repeated as national champion in 1966, finished second in points in 1967 and 1968, and regained the title in 1969.

During the late 60's, Andretti began to test his skill in other forms of racing. He won NASCAR'S Daytona 500 in 1967, averaging 149.926 in his Ford. In 1968, he entered Formula One competition, capturing the pole position in his very first race at Watkins Glen, but was forced out of the race early by clutch trouble. His first win on the Grand Prix circuit came in 1971 in South Africa in a Ferrari. For several years in the early 70's, Andretti sought to juggle Champ Car, Formula One, Formula 5000 and Can-Am racing. He won the USAC Dirt-Track championship in 1974, won several Formula 5000 races and finished second in that series in both 1973 and 1974. He also won the grueling 12 Hours of Sebring endurance race three times (1967, 1970, and 1972.)

From 1975 to 1981, he focused primarily on the Grand Prix circuit, winning 12 more races, and earning 16 additional pole positions. The highlight of his international career was 1978 when he won six Formula One races and became the second (and last) American to win the World Championship.

Perhaps the most bizarre race in Andretti's career came in the 1981 Indianapolis 500. Bobby Unser beat him by eight seconds, but the following day Unser was penalized a lap for passing cars illegally under a yellow caution flag, and Andretti was declared the winner. Unser and car owner Roger Penske appealed the race steward's decision to U.S. Auto Club. Four months later, USAC overturned the ruling, saying the penalty was too harsh. It fined Unser $40,000 and gave him back the victory.

Andretti returned to Champ Cars full-time in 1982 and two years later, he won his fourth national championship, edging out runner-up Tom Sneva 13 points. He captured the title with six victories and nine pole positions in his 16 race starts. Five of his six wins came from pole. In 1991, at age 51, Mario Andretti finished seventh in the point standings, while his son Michael won the championship. He also competed that season against his other son Jeff and nephew John, making it the first time four family members raced together in the same series.

This celebrated champion campaigned in his final season of Champ Car competition on 1994, when he retired from active participation in the sport. His 52 Champ Car victories are second to A.J. Foyt's 67. With Andretti's last win (also his 109th major career victory) at the Phoenix 200 in April 1993, he became the first driver to win Champ Car races in four decades and the first to win races in five decades.

Retirement from racing hasn't slowed Andretti. His name is now on a winery in Napa Valley, a car dealership, a chain of gas stations and a distributorship, a clothing line, a coffee table book, car washes, go-kart tracks, car care products, an IMAX movie, video games and replica cars. He does some 50 appearances a year for Texaco worldwide and accepts numerous requests to speak to corporate audiences. Married since 1961, Mario Andretti and his wife Dee Ann, still reside in Nazareth, Pennsylvania.

The Elements of Success Extreme

"Mario was absolutely terrific!  He gave a tremendous talk, filled with moving life stories that inspired the audience.  A perfect keynote speaker!"