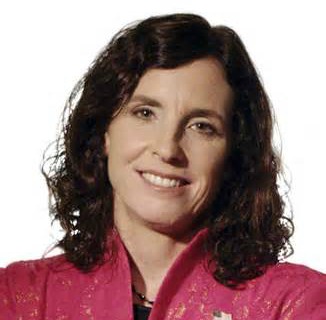 Martha E. McSally is a true pioneer. She was not only the first female fighter pilot to fly in combat and the first woman to command a fighter squadron in combat in United States history, but in 2001-2002, she earned national recognition for successfully overturning a military policy requiring all U.S. servicewomen to wear a Muslim Abaya and headscarf when off base in Saudi Arabia.

McSally grew up in Rhode Island as the youngest of five children. Her father died suddenly when she was 12 years old, putting her on a course in life formed and shaped by the tragedy and its defining perspectives.  In between heart attacks, he told Martha to make him proud. Despite a challenging adolescence dealing with grief and loss, she graduated valedictorian of her high school class in Rhode Island. She then accepted an appointment to the United States Air Force Academy and finished as a Distinguished Graduate; after graduating, she accepted a scholarship to the JFK School of Government at Harvard University. The next two years were filled with intellectual challenges and practical public policy experience at NATO Headquarters and the Joint Staff at the Pentagon.

Halfway through her year of pilot training, Congress repealed the law prohibiting women from flying combat aircraft, but the Department of Defense had not yet devised a policy on the matter. She chose an assignment as a T-37 Instructor Pilot to keep her options open. Two years later, the policy changed and Colonel McSally earned a fighter assignment in the first group of 7 Air Force women fighter pilots. McSally selected the A-10 “Warthog” and arrived in Tucson, Arizona to begin her fighter training. In January of 1995, she became the first woman in U.S. history to fly a combat aircraft into enemy territory when she flew her first sortie into Iraq in support of the United Nations no-fly zone enforcement. She subsequently flew almost 100 combat hours on two tours to the Middle East in support of Operation Southern Watch. Following her duties in the 354th Fighter Squadron, she was chosen to become an A-10 Instructor Pilot in the 358th Fighter Squadron, the first woman to upgrade to that coveted position.

Colonel McSally was assigned to Saudi Arabia on a remote tour, where she was responsible for combat search and rescue operations for all coalition aircraft enforcing the “no-fly zone” over southern Iraq. After 9/11, that responsibility was expanded to missions over Afghanistan for Operation Enduring Freedom, where she led the command and control to save 70 lives.

Next, she was selected as one of seven active duty Air Force officers for the Legislative Fellowship program. McSally had the privilege of working for Senator Jon Kyl as a member of his defense and foreign affairs team on Capitol Hill. She advised Senator Kyl on a variety of national and international security issues including missile defense, cyber security, and terrorism.

Martha McSally attracted national recognition in 2001-2002 for her successful fight to overturn a military policy that ordered all U.S. servicewomen to wear a Muslim abaya and headscarf when off base in Saudi Arabia. After attempts to change the policy for over seven years within the Department of Defense, she put her career on the line and filed a lawsuit. She then worked with members of Congress and the non-profit Rutherford Institute to draft and gain support for legislation to overturn the policy. The legislation she tirelessly shepherded was unanimously passed as a freestanding bill in the House, an amendment to the yearly defense bill in the Senate, and signed by the President in December 2002.

She returned to Tucson from Saudi Arabia in December 2001, and became a Flight Commander and then the Director of Operations in the 612 Combat Operations Squadron at 12th Air Force Headquarters. While at 12th AF, McSally deployed twice back to the Middle East in various leadership positions in the Combined Air Operations Center controlling the air campaign for Operations Southern Watch, Enduring Freedom, and then Iraqi Freedom.

In July 2004, McSally took command of the 354th Fighter Squadron, the first woman in U.S. history to command a combat aviation unit. In that role, she led her A-10 team on a combat deployment to Afghanistan in support of Operation Enduring Freedom from September 2005 until February 2006; she flew over 225 combat hours during a period of increased combat activity. She was awarded a Bronze Star and multiple Air Medals for her combat leadership and performance. Under her command, the 354th Fighter Squadron won the prestigious AFA David C. Shilling Award for the best aerospace contribution to national defense in 2005.

Martha McSally was next selected to attend the Air War College, graduating first in her class of 225 future senior military leaders. McSally’s last assignment in the Air Force was as the Chief of the Current Operations Division at United States Africa Command, responsible for oversight of all U.S. military operations and activities on the continent of Africa, including counter-terrorism and counter-piracy operations. She retired from the Air Force in 2010 after 26 years as a command pilot with over 2600 flight hours, including over 325 combat hours. She was promoted to both Major and Lieutenant Colonel two years early, representing less than two percent of Air Force officers.

After retirement, Martha McSally served as a Professor of National Security Studies at the George C. Marshall Center in Garmisch, Germany. She taught and mentored senior government officials from all over the world in critical international and national security issues.

"I expect leadership development for our organization to be world-class, and Martha McSally was the perfect fit.  Martha's real-life experience is amazing, and she has dramatically impacted our team!"