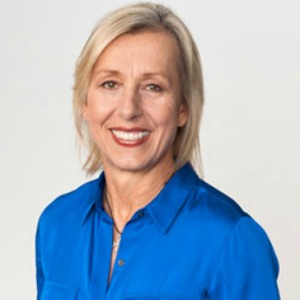 A champion on and off the court, Martina Navratilova is not only a tennis legend, but an inspirational leader who demonstrates wit, candor, and sheer motivation. Arguably the best tennis player ever to play the game, Navratilova has amassed an unmatched number of professional records during a career that spanned an amazing four decades, while proving herself to be one of the most intriguing, outspoken and respected figures of the 20th century – and now the 21st century.

During her career, Navratilova won an astonishing 59 Grand Slam titles, including 18 singles, 31 women's doubles and 10 mixed doubles. She is one of only three people who have won all three titles (singles, doubles, and mixed doubles) at each of the four Grand Slam events.

Navratilova is a staunch supporter of women's issues, gay rights, ethical treatment of animals, environmental protection, and AIDS research. She is also a founder of the Rainbow Card credit card program and the non-profit Rainbow Endowment. Since its inception in 1995, the Rainbow Endowment has been one of the strongest supporters of gay and lesbian charities in North America, having given grants in excess of $2 million dollars.

Through her television appearances, speaking engagements and tennis commentaries, Navratilova has become as popular for her humor as for her forthrightness and determination. In addition, she is an accomplished writer of both fiction and non-fiction. Her most recent book isShape Your Self, a guide to personal fitness and healthy living.

What It Takes to Become a Champion

Redefining Aging as a Baby Boomer

"Great presentation for our students. Martina delivered what we needed of her. She was perfect."