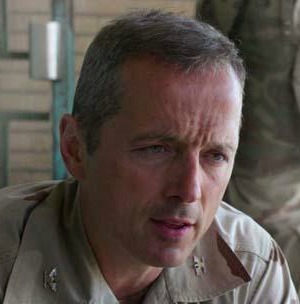 But when he watched with the world as Baghdad fell and looters plundered the Iraq National Museum, he added “raider of the lost art” to his growing list of accomplishments.

His mission in Iraq became crystal clear: get the treasures back, securing some of the most significant artifacts in the history of mankind for future generations. A Bronze Star decorated leader, Colonel Bogdanos knew the terrain. As the mastermind behind a successful collaboration of an elite group of agencies that infiltrated terrorist activity in Afghanistan and Iraq, he had earned his stripes with bold leadership.

His passion for history thrived even under the perils of warfare. He lived for six months in the dusty halls of the museum, never knowing who truly was friend or foe, while battling a flourishing black market that often sold priceless artifacts along with illegal weapons. He recounts his stunning mission amidst the chaotic world of post-war Bagdad in the best-selling Thieves of Baghdad: One Marine’s Passion to Recover the World’s Greatest Stolen Treasures.

Bogdanos is a remarkable blend of warrior, historian, and leader who tells an engrossing story abundant with history and resplendent with hope for the future.

Thieves of Baghdad: the Journey to Recover the World's Greatest Stolen Treasures

The Leadership Life: Taking Charge of Your Mission to Lead The Treasures that We Inherit

The Value of Art Consensual Leadership: The Art of Teambuilding

Thieves of Baghdad: the Journey to Recover the World's Greatest Stolen Treasures

"Great speaker. We appreciate the unique style and powerful message about his mission mission in Iraq became crystal clear: get the treasures back, securing some of the most significant artifacts in the history of mankind for future generations.  It took us there. What an evening!"