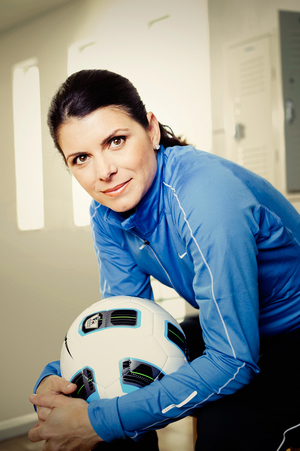 An extraordinary athlete, Mia Hamm has recently turned the athletic world on its head. Along with her teammates on the gold medal winning U.S. 1996 Summer Olympic Women's Soccer

Just how good is Mia Hamm? In the 1995 Women's World Championships, in an early game against Denmark, the U.S. team, leading 2-0, lost its goalkeeper to an injury. Having already used all their substitutes- and with ten minutes left to play- the Americans were forced to move a player from the field into the net. Hamm, normally a forward, got the call. The team, and Hamm, held on for a 2-0 victory.

The 5-foot-5 Hamm has made the extraordinary seem ordinary all her life. A gifted athlete as a child, she played baseball, basketball- even football. "I was one of the guys," Hamm recalls. Then she gave her heart, and legs, to soccer.

At 15, she was named to the U.S. national team; at 19, she was the youngest member of the U.S. squad that won the world title in 1991, starting in five or six games and scoring a pair of goals. She has been three-time All-American at the University of North Carolina, where her number has been retired; two-time college player of the year; a member of four national collegiate championship teams; and the U.S. Soccer Federation's Female Athlete of the Year in 1994 and 1995. She has now realized the dream of every athlete by winning the Olympic gold medal.

This victory in Atlanta was not just for the team, or for America. It was a victory for women athletes all over the world. Hamm remarked after the match with China, "With everyone embracing the women in these Olympic Games, we see it's all right for women to be successful." This has certainly been the case. More collegiate scholarships are being given to women athletes, and the NCAA soccer tournament expanded from 24 teams to 32 last season. The number of women's programs last season also surpassed the number of men's programs at Division 1 schools.

The Pursuit of Excellence

"Mia was perfect. She was compassionate and caring. Her presentation to the point. She really enjoys being with people and her work will impact the future of many women in sports."