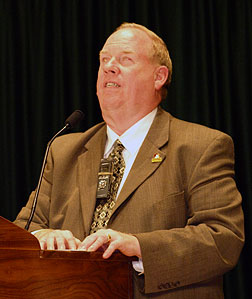 As was the case with many Americans, Michael Hingson’s life changed dramatically on September 11th. He and his Guide Dog “Roselle” were the lucky ones, however, in that they escaped the World Trade Center attack. As a WTC survivor and as a Guide Dog user, he was thrust into the international limelight.

Michael and “Roselle” have since become well-known as representatives of the strength of the human/animal bond, and have been successful in communicating the power of that bond in many media interviews and public presentations. Michael has traveled with a Guide Dog for 40 years and embodies the lifelong partnerships created by Guide Dogs for the Blind and those they serve.

Prior to becoming the National Public Affairs Representative for Guide Dogs for the Blind, Michael was district sales manager for Quantum Data Protection Division of Irvine, Calif., overseeing a sales force and field operations. He has a master’s degree in physics from the University of California at Irvine. He is a former member of the California State Guide Dog Board, and is a member of the National Federation of the Blind. Michael lives with his wife, Karen, in Novato, California.

Turning the Tables on Terrorism

Lessons from the Twin Towers

"Michael is an excellent and compelling speaker for all kinds of audiences, as well as a joy to work and arrange lectures with. We enjoyed having him speak at Adelphi University this past September. We strongly recommend him for your school/organization."