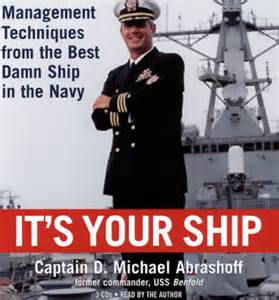 An inspiring story of innovative leadership and organizational transformation, Mike Abrashoff took command of the worst-performing ship in the fleet and made it #1 by changing his leadership style and the culture─not the crew.

When Mike Abrashoff took command of the USS Benfold, the ship’s performance ranked at rock-bottom. Worse─the crew didn’t feel safe should they be called into action. Determined to improve performance, but without the power to hire, fire or promote personnel, Abrashoff focused on what he could change: the ship’s culture.

His innovative approach broke from the traditional command-and-control leadership style and sought to see the ship from the eyes of his crew─creating a guiding set of principles he calls Grassroots Leadership. When crew members asked Abrashoff to solve a problem, his response became, “It’s your ship─what would you do?” The result was an empowered and engaged team that turned the ship into the Navy’s top performer. People at every level in business relate to Abrashoff’s dilemma: being held accountable for results without having the ability to make the rules.

Publications from Fast Company to the Harvard Business Review have heralded this remarkable story─and Abrashoff’s first book, It's Your Ship: Management Techniques from the Best Damn Ship in the Navy, is a best seller with nearly 1 million copies in print. In 2012, the much anticipated 10th anniversary edition of It’s Your Ship will be released with updated content and a new chapter.

Innovation Leadership: It's Your Ship

"Mike Abrashoff was terrific. His message resonated with our members. He was also so easy to work with. The best way to describe his presentation is the book signing. It is the first time that we have sold out the books of the keynoter!"