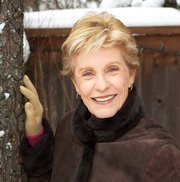 Patty Duke, Academy Award winning actress, past President of the Screen Actors Guild, and best selling author, has been delighting and challenging audiences for more than 40 years with her work in movies and on television.

Her Oscar-winning portrayal of blind, mute and deaf Helen Keller in "The Miracle Worker" launched Patty as one of America's finest young talents. Still a teenager, she went on to enjoy success in "The Patty Duke Show" before establishing herself as one of televisions most versatile and beloved actresses.

Her career has brought her to Broadway, Feature Films, Television Series and Cartoons. Seventy-two television movies have afforded her a wide variety of roles. Neely O'Hara of "Valley of the Dolls", Martha Washington in "George Washington", Mother of the Bride in "Prelude to a Kiss." Helen was in the controversial lesbian comedy, "By Design" and Anne Sullivan in the 1980's remake of "The Miracle Worker" to cite a few. Patty has received much recognition from her peers - An Oscar, two Golden Globes, three Emmy Awards and six Emmy Nominations and a People's Choice Award. Community service awards have honored her commitment to many social issues.

Since the publication of her autobiography, Call Me Anna and her second book A Brilliant Madness, Patty spends a great deal of time and travel speaking on the topic of mental illness. Married to Firefighter Michael Pearce, she makes her home in North Idaho. It is here that they raise their teenage son, Kevin. At the moment only two of her children have joined her in the family business. Sean Astin, well known as "Rudy" and Sam in "Lord of the Rings." His Brother, Mackenzie Astin (Iron Will fame) has just completed a series "1st Years." Both play a great game of "All Star Baseball." At this writing, Patty continues to jump from Television to Film to Commercials to Cartoons and the Theatre. Patty is in her element as her career heads into its Fiftieth year. She finds it just as adventurous as it was when she was seven!

Advocating for Those With Challenges

My Life Story in Theater and Film

"Patty did a fantastic job as our keynote speaker. She was well received and stayed focused on the purpose of our meeting."