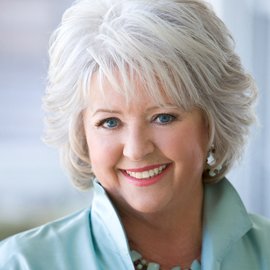 Founder of "The Lady & Sons Restaurant" in Savannah, Host of "Paula's Home Cooking" and "Paula's Party" on Food Network. As a young girl growing up in Albany, Georgia, Paula Deen never dreamed she would become an American icon. As a young mother, Paula was living the American dream, married to her high school sweetheart and raising two adorable boys, when tragedy struck. Her parents died, her marriage failed, and she began a prolonged battle with agoraphobia. With her boys in their teens and her family near homelessness, Paula took her last $200, reached deep inside her soul and started “The Bag Lady,” a home-based catering company that marked the start of Deen’s professional cooking. With sons Jamie and Bobby delivering “lunch-and-love-in-a-bag,” beginning in June 1989, Paula turned around her life by sharing what she knew best, traditional Southern cooking.

Deen’s first business, The Bag Lady, brought out Paula’s strengths and stabilized her family. She moved her catering company to a small restaurant at a Best Western motel in Savannah and finally opened her first restaurant, The Lady and Sons, with Bobby and Jamie five years later. The restaurant was a hit and the popularity of Paula and her cooking led to her first cookbook, 1998’s "The Lady and Sons Savannah Country Cookbook." This gave her fans the opportunity to try Paula’s recipes at home, and led to her first television appearance on QVC. Paula’s genuine warmth and folksy personality made her a natural for television. In 1999, USA Today food critic Jerry Shriver named The Lady and Sons “International Meal of the Year.”

Paula’s rise to stardom was underway but when she premiered “Paula’s Home Cooking” on the Food Network in 2002, she was on the verge of superstardom. The network added “Paula’s Party” in 2006 and Bobby and Jamie began making appearances with Paula on the programs. The Food Network gave Bobby and Jamie their own show, “Road Tasted." Bobby’s show “Not My Mama’s Meals” is a hit on the Cooking Channel/Food Network, and Jamie’s show “Home for Dinner with Jamie Deen” is achieving similar success. As well, Paula is a two-time Emmy Award winner.

In addition to her success on television, Deen is the author of 14 cookbooks that have sold more than 8 million copies and her bimonthly magazine Cooking with Paula Deen has a circulation of nearly 1,000,000. When Paula tours the country making personal appearance to talk about life, family and cooking, thousands of people come to participate. On New Year’s Day 2011, Paula was the Grand Marshall of the Tournament of Roses Parade.

Paula’s business interests have grown considerably. In 2011, Paula Deen Foods was launched and beginning in 2013, the business featured food products based on her traditional recipes and lighter versions as well. Along with The Lady & Sons, which she co-owns with her sons Jamie and Bobby. Paula and her brother Bubba own Uncle Bubba’s Oyster House, a leading seafood restaurant in Savannah.

Ever grateful for all she has been blessed with, Paula and her family continue to give back to the community. Paula is a member of the board of the Bethesda Home for Boys, works tirelessly for America’s Second Harvest and partners with Smithfield Foods Helping Hungry Homes, which has donated protein for more than 10 million meals for America’s hungry.

An Evening with Paula Deen

Investing in Our Future - Giving Hope to our Boys

"Paula was perfect.  The audience enjoyed the dynamic presentation.  We would recommend Paula to anyone who want a powerful and moving speaker."