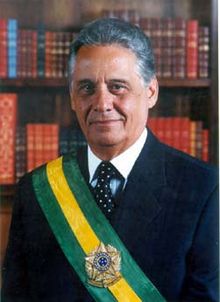 Fernando Henrique Cardoso is the two-term President of the Federal Republic of Brazil, first inaugurated on January 1st, 1995 and re-elected by an absolute majority on October 4th, 1998. President Cardoso's term ended January 1st, 2003.

President Cardoso was elected to the Brazilian senate from the state of Sao Paulo in 1986, and two years later helped to found the Social Democratic party. He later served from 1992 to 1993 as Foreign Minister and became Economy Minister in 1993, credited with successfully controlling inflation and turning the troubled Brazilian economy around. He was elected president in 1994 and quickly moved to reduce government involvement in the economy and to attract foreign investment to Brazil.

A leading Latin American sociologist, President Cardoso is currently a professor-at-large at the Thomas J. Watson Jr. Institute for International Studies at Brown University. He delivers lectures, participates in various symposia, and interacts with students in the classroom. He works with faculty in development studies, Latin American studies, Portuguese and Brazilian studies, and other departments, institutes, and centers.

He has been a visiting professor at various academic centers in Europe and the United Sates, including the Collège de France, University of Paris, University of Cambridge, University of Berkeley, and Stanford University. Some of his books on sociology, political science and international relations are translated in several languages (English, French, Spanish, Russian, Chinese, Romanian, and others). He also speaks English, French, Portuguese, and Spanish.

In his speeches, President Cardoso draws from his experience as head of state in a major emerging economy. He is uniquely qualified to address his speaking topics, which includes Global Governance in the 21st Century: A look at contemporary world affairs (namely the fact that the economy has become global but politics has not), and Globalization and Public Policies: an insight into the opportunities and constraints set by the globalization process.

Global Governance in the 21st Century

A look at contemporary world affairs

Brazil and the World Superpowers

"President Fernando Cardozo's eloquent and educational presentation was the highlight of our conference. I recommend him to any audience. He is engaging, witty and entertaining."