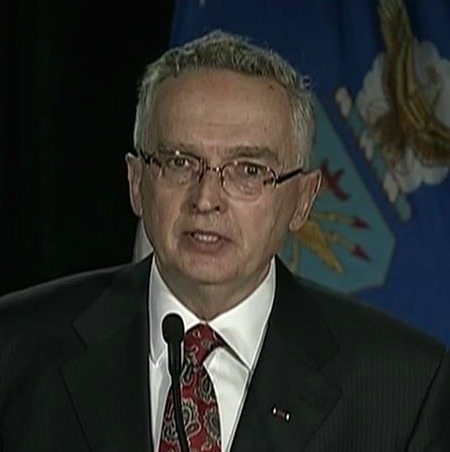 Ralph Peters is a Fox News National Security Analyst and author. As a novelist he has sometimes written under the pen name Owen Parry.  Peters enlisted in the Army as a private in 1976, after attending Pennsylvania State University. His first assignment was in Germany. After returning from Germany, Peters attended Officer Candidate School and received a commission in 1980. Subsequently, he served with 1st Battalion, 46th Infantry Regiment, then part of the 1st Armored Division. Peters spent ten years in Germany working in military intelligence. He later became a Foreign Area Officer, specializing in the Soviet Union. He attended the Command and General Staff College. His last assignment was to the Office of the Deputy Chief of Staff for Intelligence. He retired in 1998 with the rank of Lieutenant Colonel. Peters never saw combat during his tenure.

Peters's first novel was Bravo Romeo, a spy thriller set in West Germany, was published in 1981. Since then his novels progressed from futuristic scenarios involving the Red Army to contemporary terrorism and failed state issues. His characters are often presented as military mavericks who have the knowledge and courage to tackle problems others cannot or will not. His novel, The War After Armageddon, was released in 2009. In 2008 he published the non-fiction Looking for Trouble: Adventures in a Broken World. He is a regular contributor to the military history magazine, Armchair General Magazine, and he also serves on its Advisory Board.

He has published numerous essays on strategy in military journals such as Parameters, Military Review, and Armed Forces Journal, reports for the United States Marine Corps">United States Marine Corps, formerly wrote a regular opinion column for the New York Post, and has written essays and columns for USA Today">USA Today, The Wall Street Journal, The Washington Post, Newsweek, The Weekly Standard, The Washington Monthly and Army magazine. Peters is a member of the Board of Contributors for USA Today's Forum Page, part of the newspaper's Opinion section.

Wake Up America:  The Challenges Ahead

The Soviet Union and China Alliance

The War After Armageddon

Looking for Trouble: Adventures in a Broken World.

"Col Ralph Peters is a magnificent speaker.  He is inspiring, educational, challenging..."